Dive into the heart of the Tour de France, but also the Ronde Van Vlaanderen (Tour of Flanders), Ghent-Wevelgem and the First World War on the occasion of the Grand Depart of the Tour de France 2019, which will start this year from Brussels. On the first stage of the Tour, you will be thrilled by the Kappelmuur, which, embellished with its chapel, has become over the decades the most iconic of the cobbled mounts of the Ronde. On the second stage, you will discover the incredible power and beauty of each team during the team time trial in the centre of Brussels.

And because there is only a small step between cycling and History, we will take you to discover unique places that contain the iconic bicycles, jerseys and stories of the legend of cycling, not to mention paying tribute to all those war heroes who disappeared on the battlefields of Flanders during WWI.

Visit to the Tour of Flanders Center in Oudenaarde

Guided tour of the Racing Cycling Museum in Roeselare

Meals not mentioned in the “Included>Meal” section

Beverages at bars, hotels and restaurants

Veymont reserves the right to modify the itinerary and the accomodations if necessary, as stipulated in our GTC.

Welcome into the legend of cycling !

We greet you at Brussels airport before taking you to Oudenaarde to start this insane week in total immersion in the current and past legend of cycling! We will spend the next 4 nights perfectly settled in our 4* hotel in the heart of the very charming city of Oudenaarde, capital of Flemish cycling, the heart of the Tour of Flanders, whose Belfry of the City Hall is classified as a UNESCO World Heritage Site.

We take advantage of this first day to adjust our bikes and to discover the Centrum Ronde Van Vlaanderen which is located a stone’s throw from our hotel. 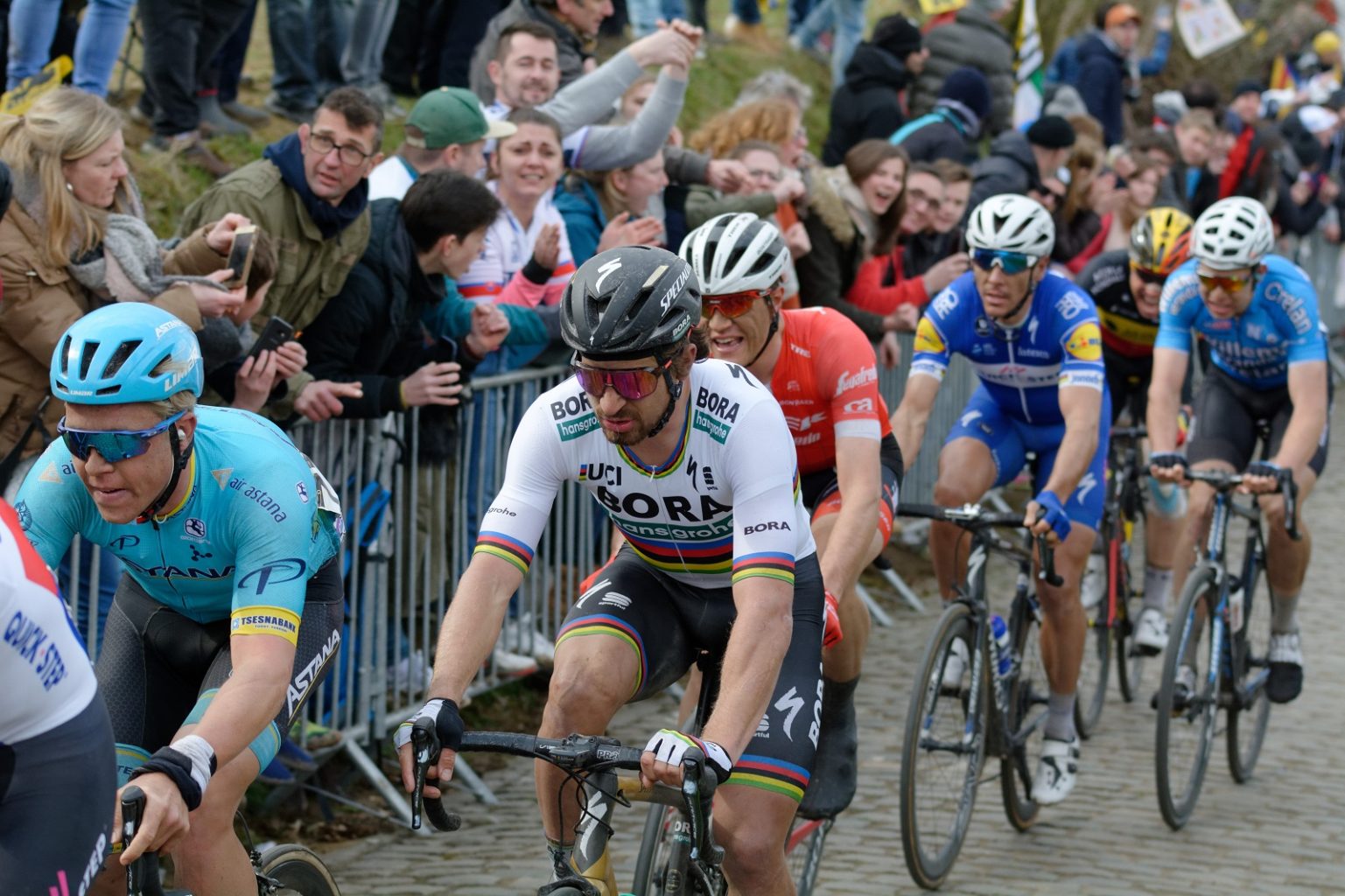 Conquering the cobbled mounts of the Ronde Van Vlaanderen

Today we are setting our wheels in the scenery of the Tour of Flanders, on the land of the heroic achievements of Johan Museeuw, Tom Boonen, Peter Sagan and Philippe Gilbert. We start off on the main slopes and the most important cobbled sections of the final of this mythical event, completing it once or twice, depending on your appetite for cobbled ascents, the loop connecting the terrible Kopenberg, Sleenbiekdries, Taienberg, Kruisberg, the endless Old Quaremont and, as for the pros, the Paterberg as final arbiter

The die is cast. Pure cycling.

At the very heart of History

The bravest leave the hotel early this morning on the small and typical country roads of Flanders (much less cobbles today!) in the direction of the well named Museum of Racing Cycling in Roeselare. It is here that, thanks to the support van, we are joined by the rest of the group that has decided to take things a little more lightly today after a big first day. This cultural space to the glory of cycling is becoming an emblematic place for all cycling aficionados.

Along the way, the various monuments and cemeteries along the Ypres Salient, an important front line, remind us that bloody battles raged in this region during the First World War.

After crossing Ypres, we end this day in the heart of History at the Kemmelberg, the theatre of violent fighting in April 1918 and the decisive landmark of the classic Ghent – Wevelgem !

Kappelmuur & the madness of the Tour

The Tour starts today from Brussels but we will only reach the Belgian capital tomorrow because we want to enjoy it today through a mythical place: the Grammont Wall or Kapelmuur (1.2 km of cobbles at 7.8%) which already stood on the route of the first of Eddy Merckx’s five Tour in 1969.

From our hotel, we take another part of the Tour of Flanders route to Grammont. Here, we join the crazy atmosphere created by the Flemish supporters, who are always fond of these events, to experience the passage of the advertising caravan and the first stage of the most prestigious of all cycling races!

From Grammont we take another route that takes us back to Oudenaarde and arrive in time to see from our hotel the finish of this first stage around a round of Belgian beers ! So?!! Who will be the first yellow jersey of the Tour 2019?

We arrive in Brussels in the morning and have all day to enjoy the first big meeting for the big contenders for the final victory: a royal 28-kilometre team time-trial in the heart of the Belgian capital !

It is through wide and rolling streets linking the Royal Palace to the Atomium that the teams of big calves will try to take on yellow in an exercise for purists, with an incredible aestheticism and power.

Unless you want to continue your adventure on the Tour de France by joining us in stages 5, 6 and 7 of the Tour in the heart of the Alsace vineyards and the Vosges mountains (it’s this way!), we’ll take you back to Brussels airport this morning to wrap up this crazy week on the roads that have written and still write the legend of cycling !

Up for this adventure ?