Cycling the Vertigo Roads of the Vercors

You are in the Vercors Natural Park, Veymont’s holy land, as this is were we have our roots and ride our bike all year long.

Made of a mosaic of oak forests, highland plateaux and serrated peaks in a Dolimites style, rewards are rich for cycling and nature lovers. Tranquility, beautiful landscapes, fresh air. You have found the perfect place to take a well-deserved break and reconnect.

Spectacular and audacious, the roads of the Vercors were built in the 19th century to open the massif to the rest of the world. These vertiginous routes and the exceptional panoramas they offer have made them famous for biking, such as the Combe Laval vertiginous road. Topping it all, the Réserve Naturelle des Hauts-Plateaux du Vercors is France’s largest terrestrial nature reserve.

But the Vercors is also famous in the history of France as there is not a village not a forest, not a
mountain of the Vercors which has not been the scene of fighting or acts of Resistance during the WWII. Indeed, at that time the Vercors, a true natural fortress, was an important base for the French Resistance.

During cycling holiday in the Vercors, we basecamp near Villard de Lans. where it’s easy to dip into the park from Grenoble, just a few kilometres northeast.

I BOOK NOW I WANT TO GO CUSTOM / PRIVATE

Veymont retains the right to change the itinerary if necessary as stipulated in our GTC.

DAY 1 - Arrival & Ride the Vertiginous roads of the Vercors

We welcome at Grenoble TGV this morning at 10 am before driving you to your hotel in Villard de Lans. After a bike fitting and a tour oriention, follow your guides and ride your bike through an unlikely route in narrow gorges (Ecouges, Nan, Presles and Bourne) with portions of the itinerary corbelled above the void, and others carved into the rock. The water has cut magnificent gorges in the limestone of the Vercors since millennia. Man has taken advantage of these routes to dig on the side of a cliff bold roads at the end of the 19th century and thus open up the Vercors to the world. These gorges, surprising and a little confidential are now classified as a sensitive natural area.

A spectacular and impressive day on your bike ! 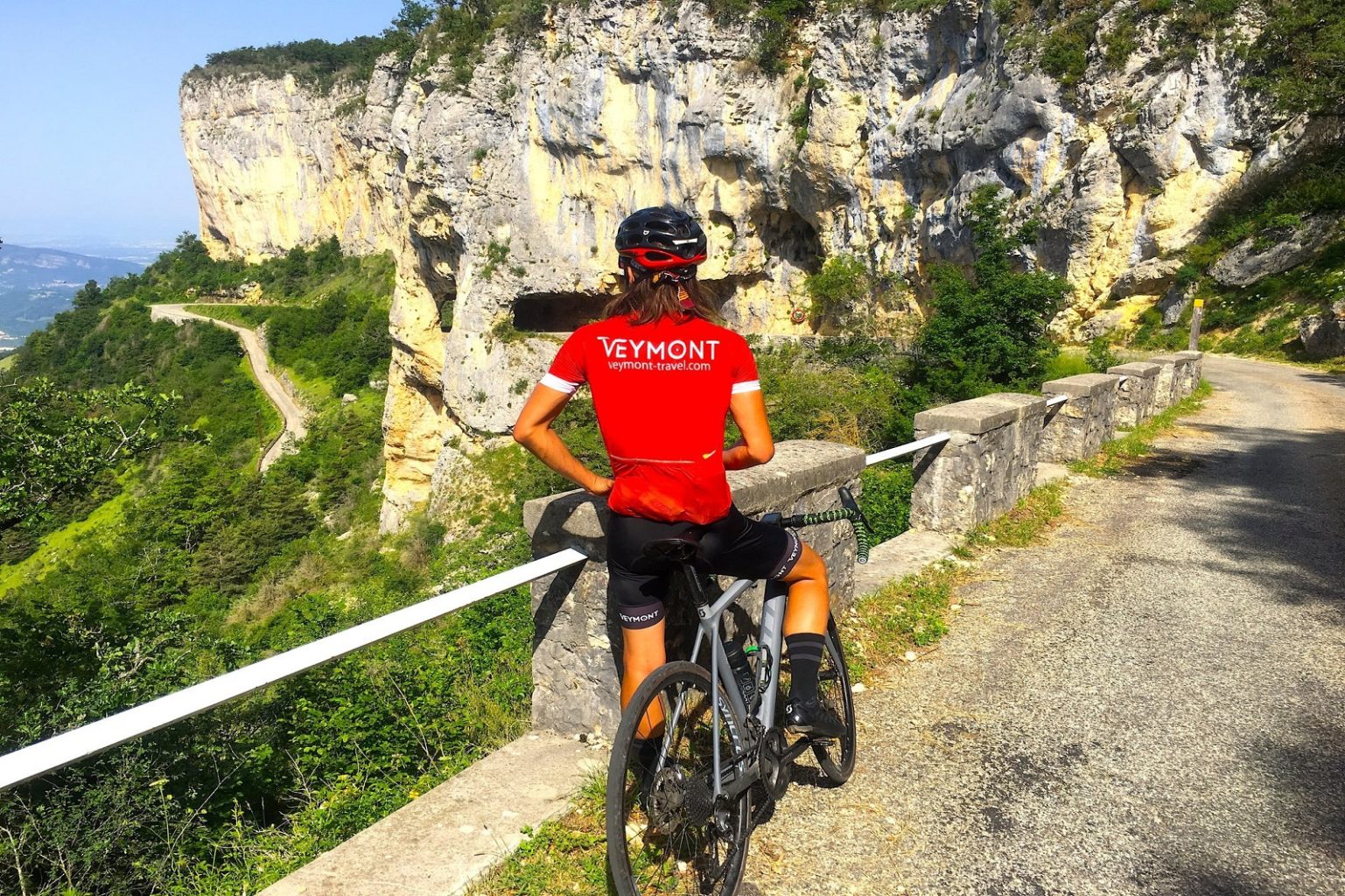 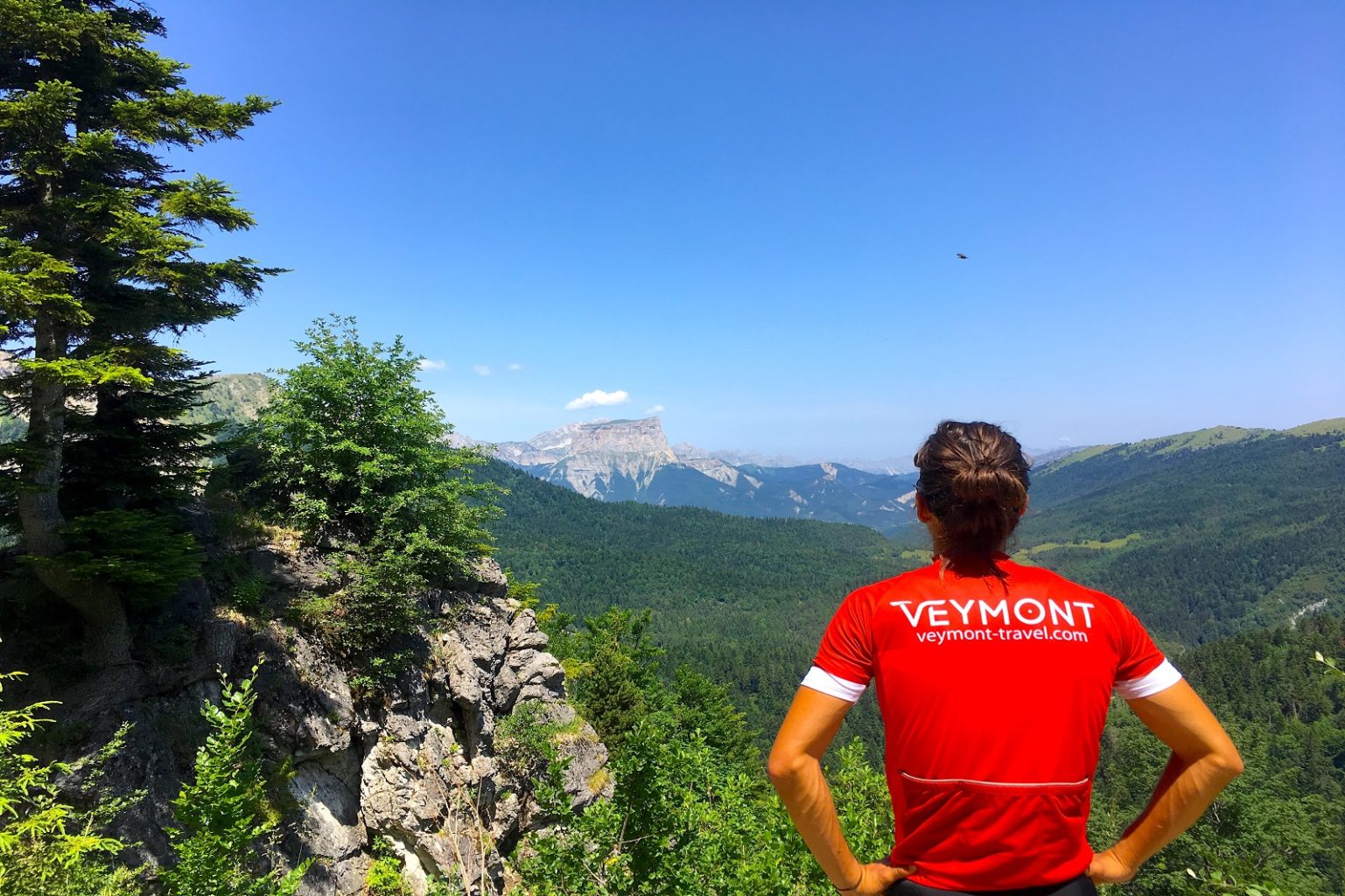 We take the van this morning to reach the footsteps of the Mont Aiguille and the Grand Veymont, the highest peak of the Vercors. Facing this impressive scenery, we start our ride and sneak in towards the south-east corner of the Vercors. Bordered by cliffs which are reminiscent of the Dolomites, the road stretches out into a breathtaking landscape and reach the Col de Rousset, one of the gateways to the Hauts Plateaux Nature Reserve, a gateway to adventure and emotion

The road runs between Die and the Highlands of the Vercors in the middle of a landscape still Provençal, rocked by the scents of lavender. This road with impressive pin bends offers a variety of landscapes and colors quite unique. The arrival at the pass is just as exceptional with a panoramic view of the Diois Valley and the foothills of the Drome. Breathtaking!

Pont-en-Royans will surprise you at first sight. His ochre, yellow or pink houses had already impressed Stendhal. They are built on the rock, with protrusions above the water and wooden supports. Unique and picturesque!

We then ride towards Combe Laval, one of the most vertiginous roads in the Vercors! Aerial, carved into the impressive cliffs, the audacious road hangs over the valley, 600 m below. After several tunnels, the road opens out offering spectacular views of Combe Laval’s magnificent circus.

At the end of our itinerary, we reach the villages of Vassieux-en-Vercors and La Chapelle en Vercors where we will have the opportunity to pay tribute to the French Resistance in the Vercors, the massif being famous for its Maquis from 1941 to 1944. First of all a refuge for many young people, the massif served as a citadel for the famous “Plan Montagnard”. Unfortunately, history has shown a different story and the Maquis and civilian populations have been severely attacked and repressed by more numerous and better armed enemies. 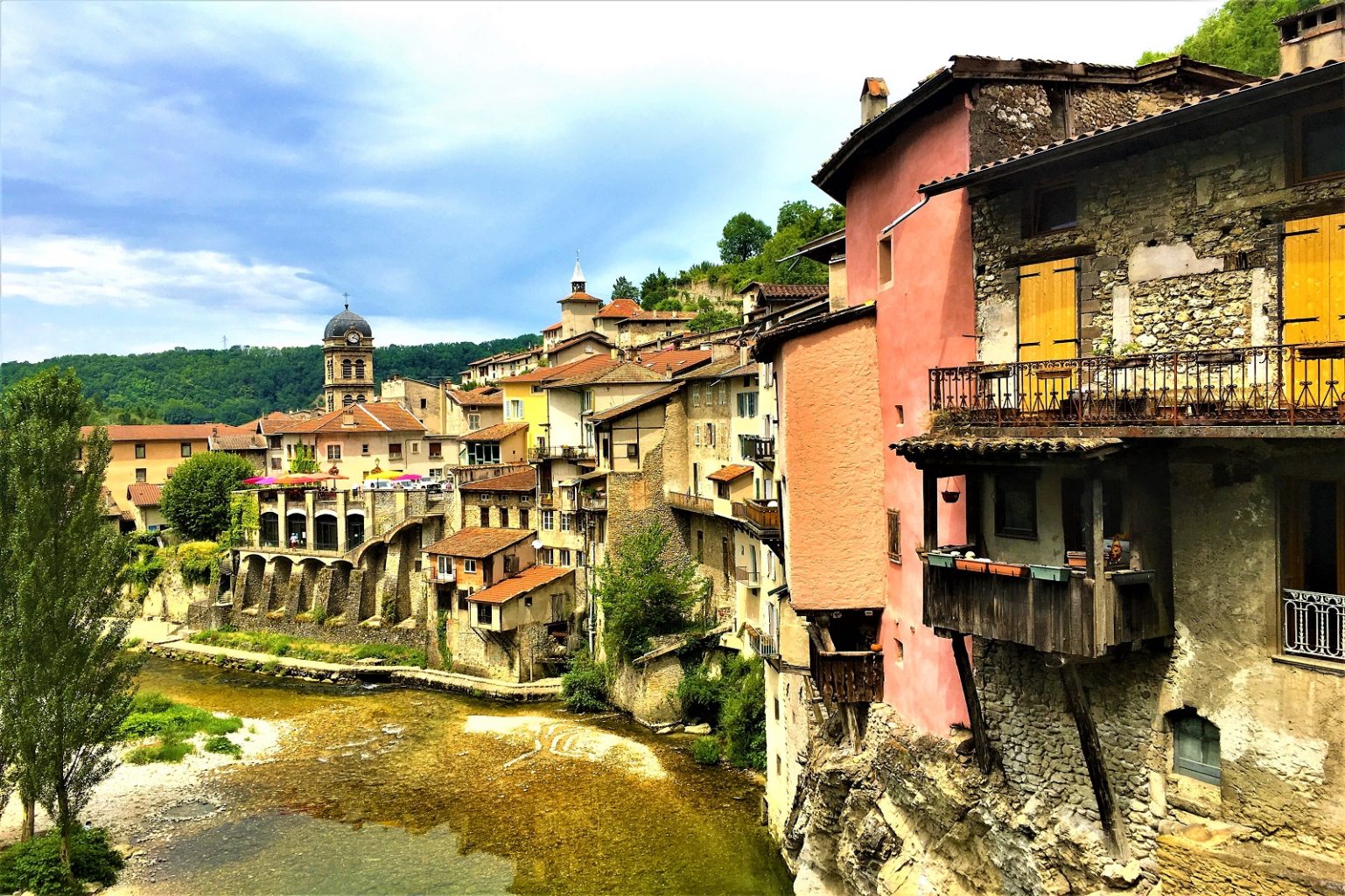 It is unfortunately already time to say goodbye. We will take you back to Grenoble TGV after breakfast to end this Vercors basecamp cycling tour, unless you want to extend your cycling holidays  with Veymont,

Veymont retains the right to change the hotels if necessary as stipulated in our GTC.

In Villard de Lans, in a quiet environment, the hotel*** La Roseraie offers you comfortable rooms and many services for a simple holiday. Restaurant and wellness area will allow you to enjoy and relax on site.
Ideally located, you can access the centre of Villard de Lans to stroll through its narrow streets and shops  Everything has been thought out so that your discovery of the Vercors rhymes with ease, pleasure and comfort. Rewarded for its quality with a range in the Michelin guide since 2012, in the Gault & Millaud guide since 2017.. In a particularly pleasant setting combining contemporary furniture and the warmth of wood, the Roseraie restaurant and its chef will help you rediscover the traditional flavours of Vercors cuisine, a refined blend of modernity and authenticity. For a more comfortable travel experience, you can choose to bring your own pedals, saddle and helmet with you on the trip. Your guides will install your equipment on the first day when you adjust your bike.

Included with a road bike rental

Included with a hybrid bike rental

*Price may vary according to the season, the hotel availability and supplement(s) chosen

Departures are guaranteed from 4 participants. In case there are less than 4 participants a supplement will be requested to guarantee the departure of the tour.

If you are a group of more than 7 people or you would like to privatize or customize the tour, please contact us to adjust our offer to your needs.

3 days of cycling on scenic roads

Meals not mentioned in the “Included>Meal” section

I book now I want to go custom / private 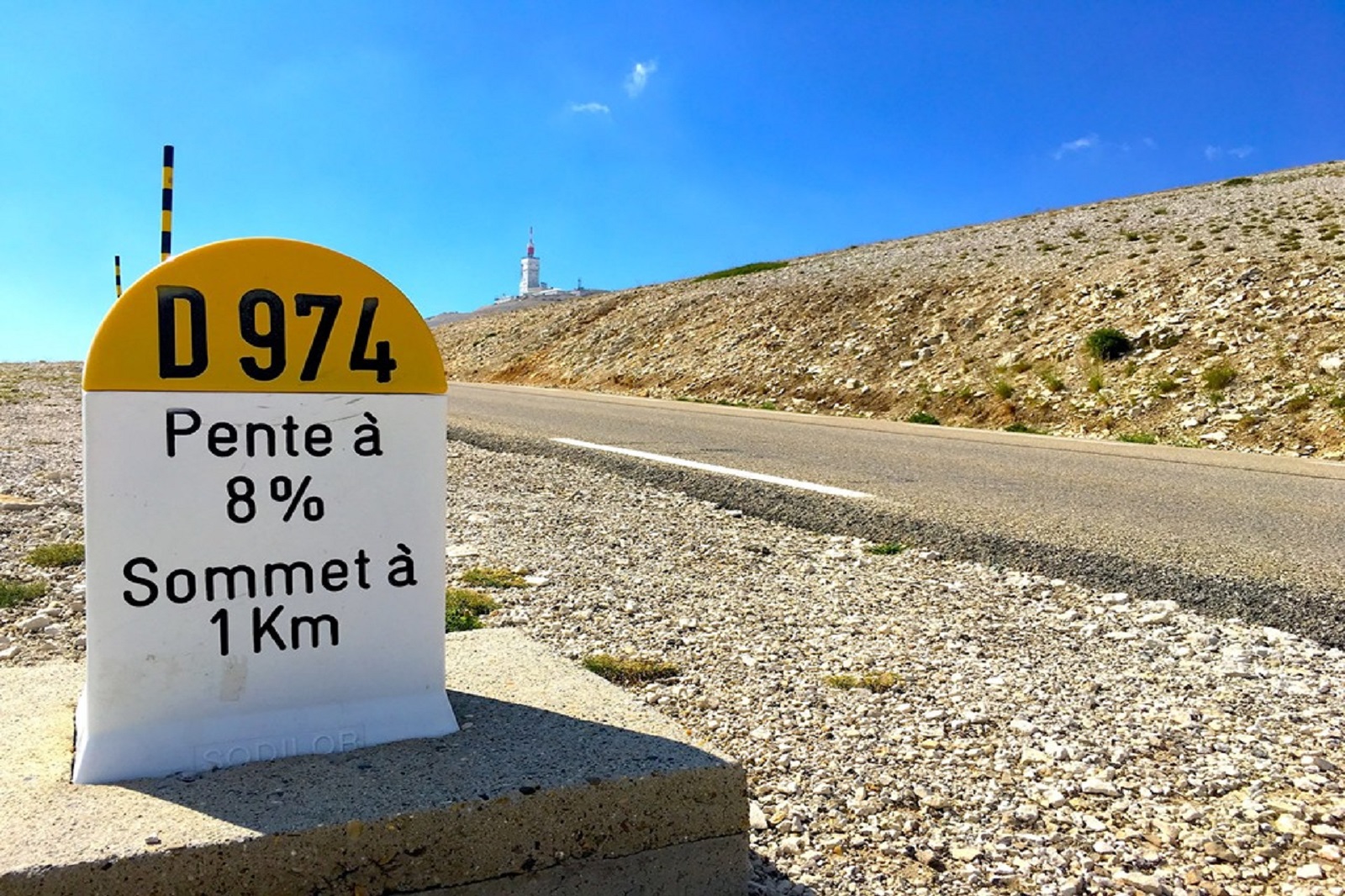