CYCLING AROUND THE MONT BLANC ON THE BORDERS OF FRANCE, SWITZERLAND AND ITALY.

This article follows the scouting I conducted in the summer of 2020 in the Alps to design a trip that you can discover on Mont Blanc Bike Tour.

A road bike tour around Mont Blanc is an adventure through France, Switzerland and Italy, it’s taking an itinerary that meanders every day in the heart of majestic alpine landscapes: snowy summits, glaciers, high altitude lakes, mountain pastures, mythical passes.

The border passes of Grand Saint Bernard and Petit Saint Bernard as well as the Cormet de Roselend often used by the Tour de France are the giants to be climbed during this 350 kms long and 8000 m D+ cycling trip. 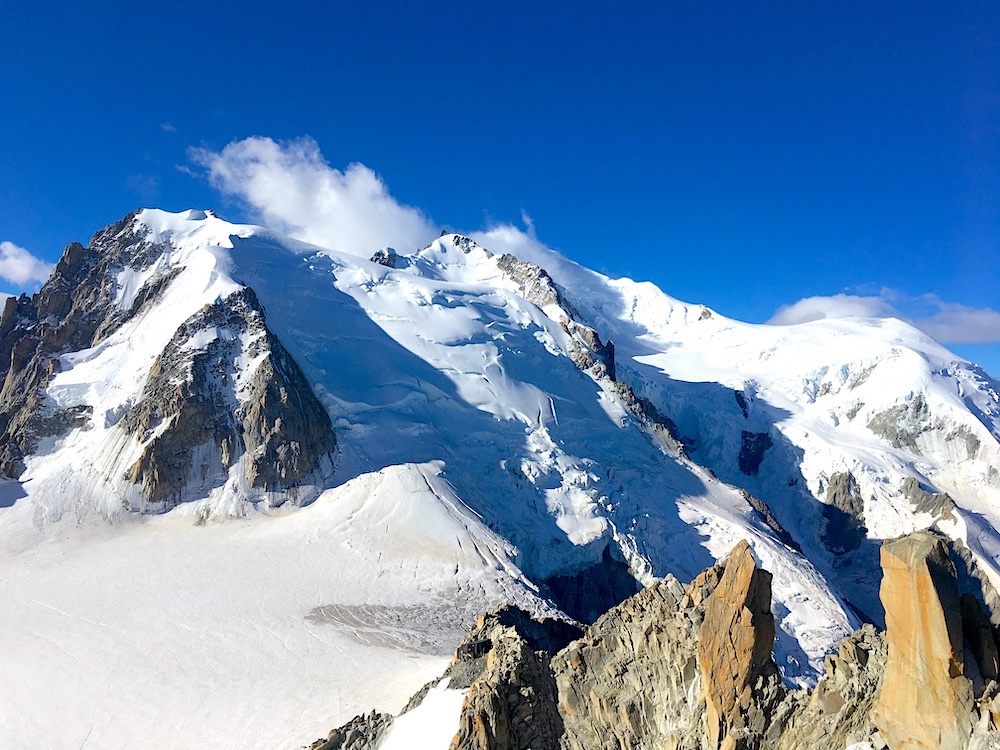 View of the Mont Blanc from the Aiguille du Midi, Chamonix, France 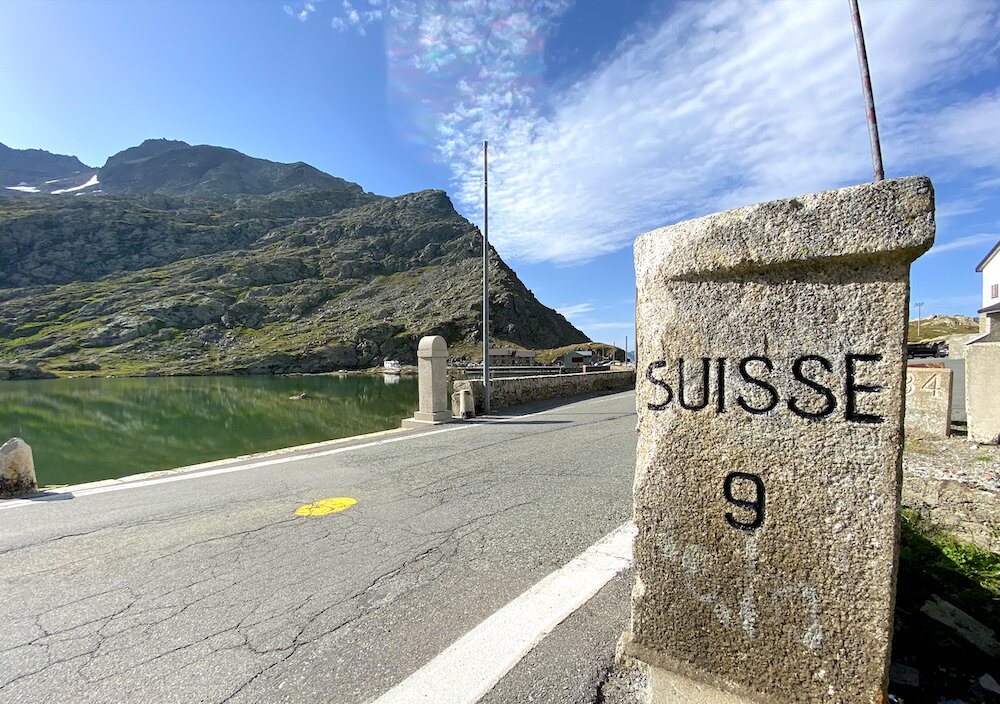 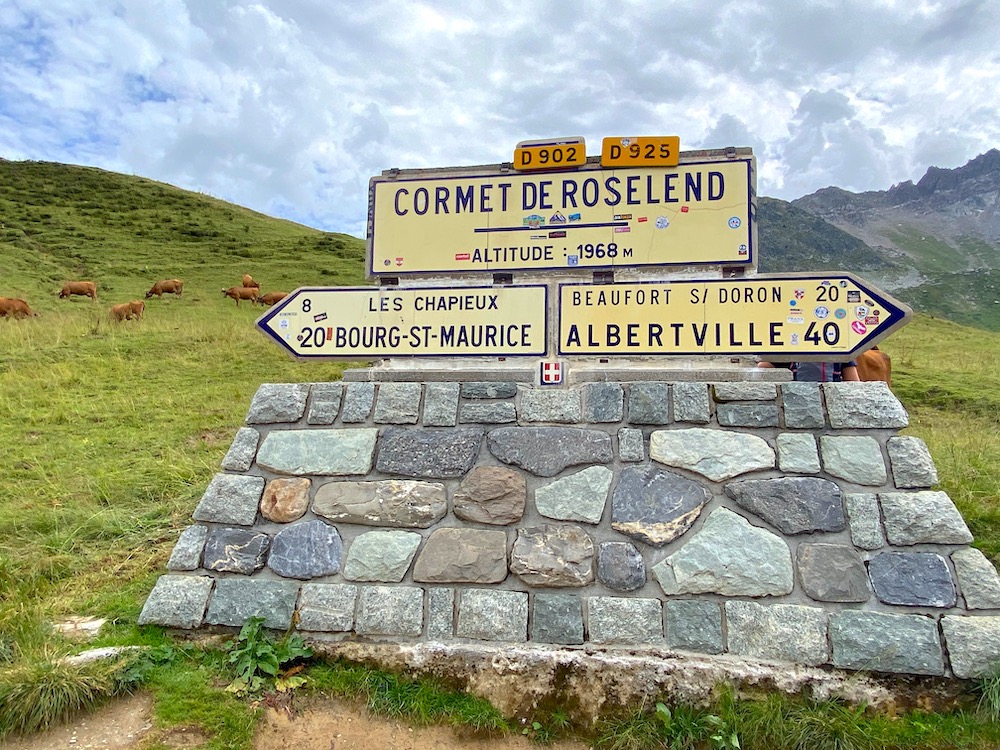 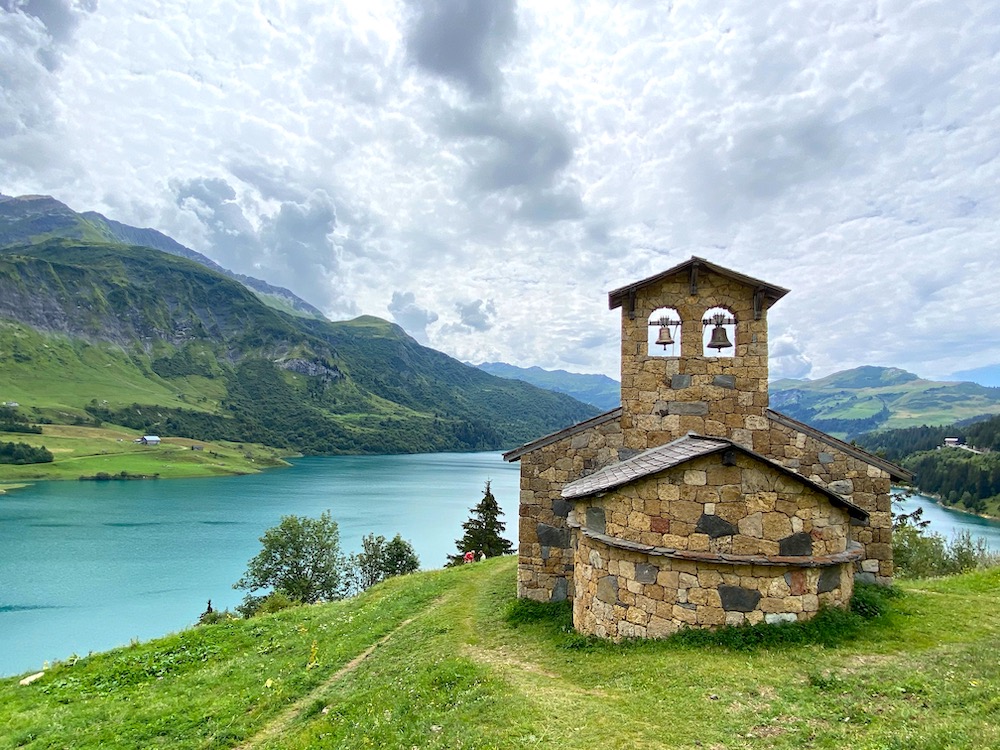 Until the 18th century, the high mountains represented nothing but dangers and constraints for the local populations. The glaciers were considered as cursed places, inhabited by demons. Only crystal makers and chamois hunters dared to venture there. History would have it that one of them, Jacques Balmat, accompanied by Dr. Michel Gabriel Paccard, was the first to reach the summit of Mont Blanc on August 8, 1786, at the instigation of the Geneva scientist Horace Benedict De Saussure.
At that time the Chamonix valley belonged to the Duchy of Savoy, itself part of the Kingdom of Sardinia. 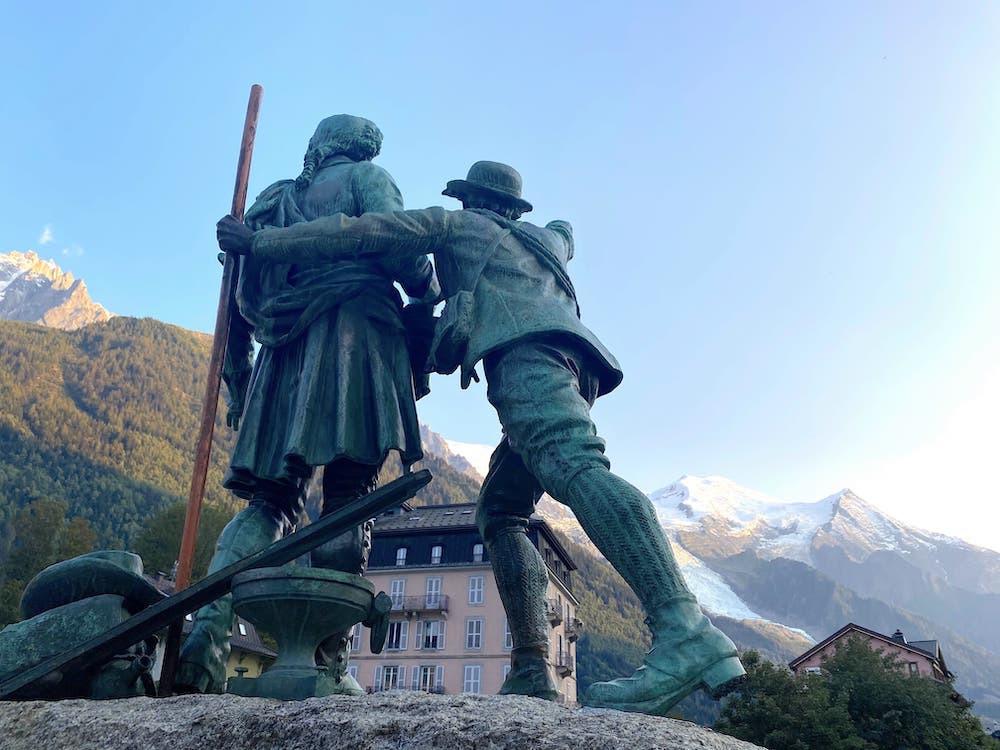 The founding act of mountaineering 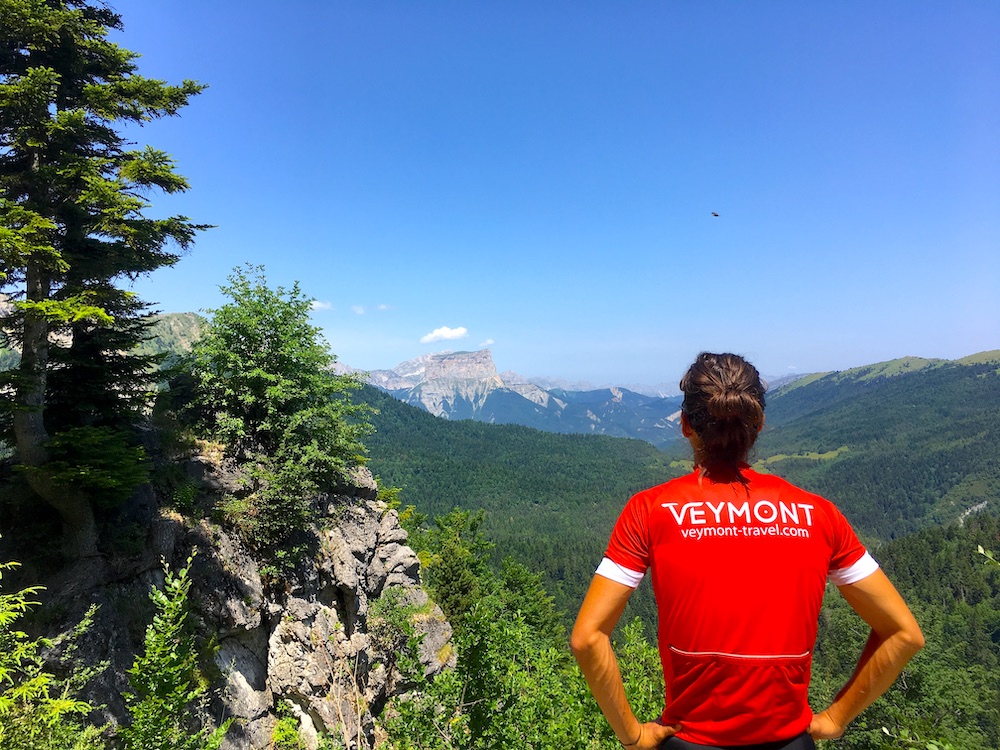 View on the Mont Aiguille and the Grand Veymont. Vercors, Isère, France 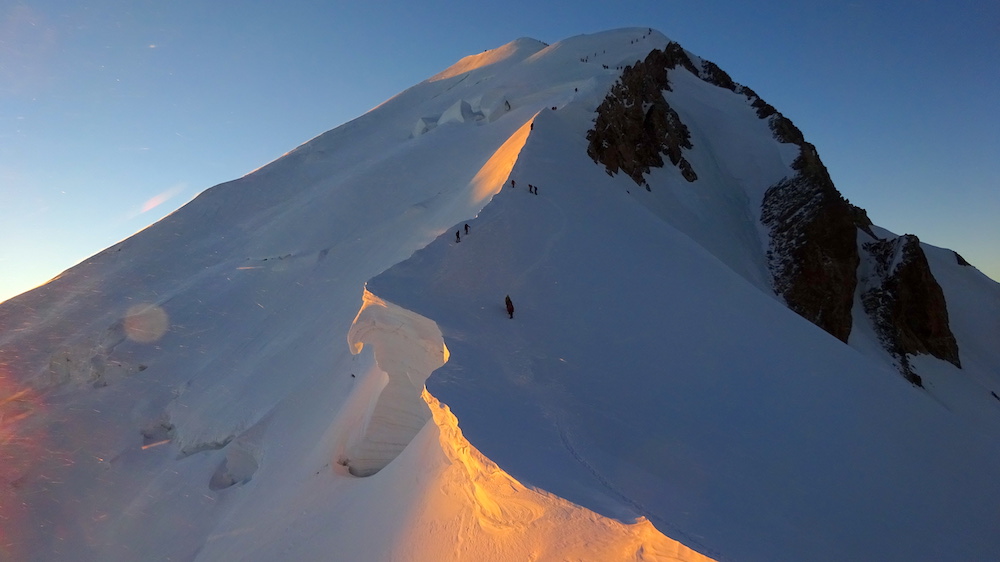 View on the summit of Mont Blanc at dawn during the ascent. Chamonix, France

View of the Mont Blanc massif

The Mont Blanc is inseparable from Chamonix, the world capital of mountaineering. This small town (less than 10,000 inhabitants) is located at an altitude of 1000 m in the valley of the same name, a few kilometers from Switzerland and Italy.
Located near many natural sites, Chamonix allows access by cable car to the Aiguille du Midi (3842m) and by small train to the Mer de Glace in a few minutes. The Compagnie des Guides de Chamonix also contributes to the reputation of the city.
It is often considered that it all began in 1741 when two great British explorers shared their fascination for the region’s “glaciers” and in particular for the Mer de Glace. The number of visitors then rapidly increased and the inhabitants of the “village” of Chamonix, already hunters and crystal makers, naturally became local guides.
The Compagnie des Guides de Chamonix was created in 1821 following an accident on the slopes of Mont Blanc where guides lost their lives.A solidarity fund was set up to help the bereaved families and a principle of fair distribution of work was established: the Caisse de Secours (financial aid to families) and the Tour de Rôle (in turns) were born. 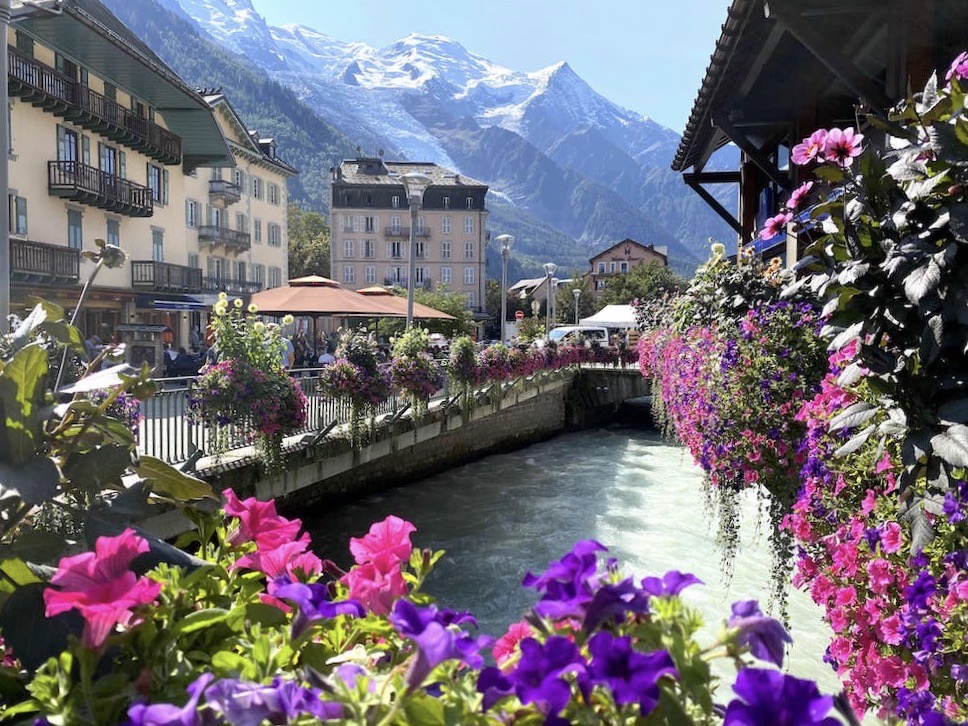 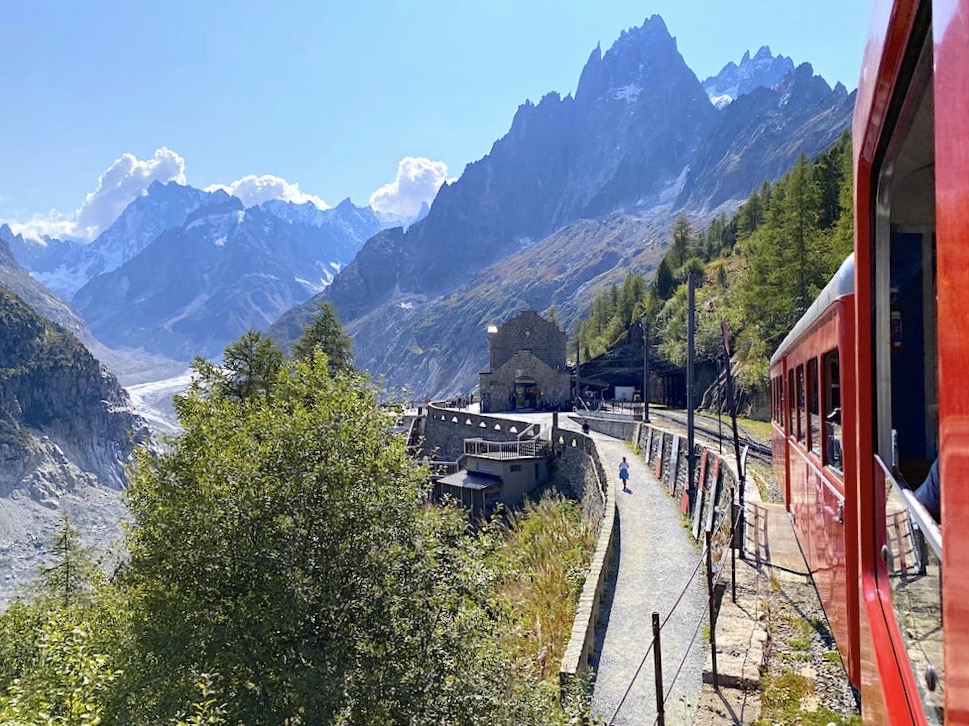 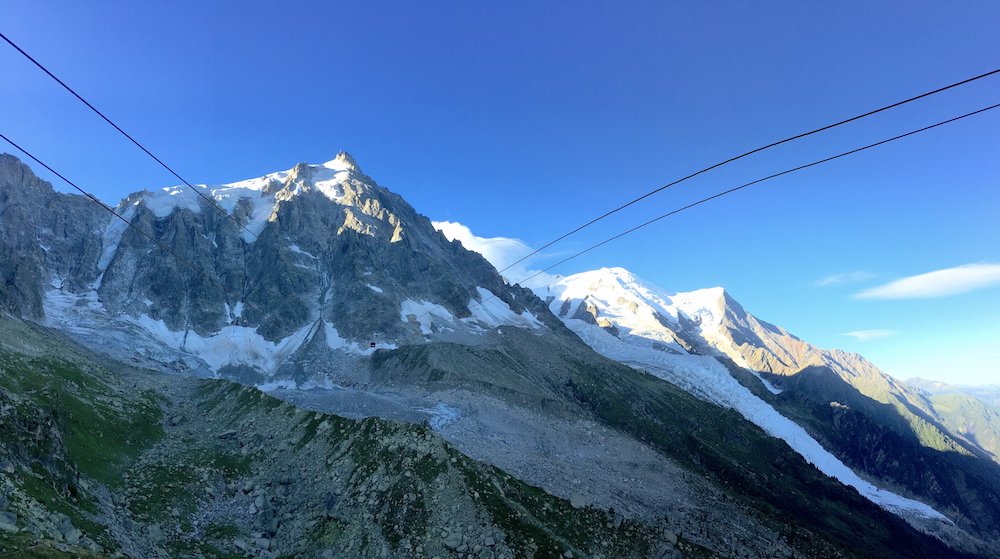 In this part of Europe, France’s heritage is always present, starting with its language.
Thus in the part of the Swiss canton of Valais that is crossed: Martigny, Champex, Orsières as well as in the autonomous region of Valle d’Aosta in Italy: Aosta, Courmayeur French is the/an official language.
Indeed, for the latter, it is a little-known characteristic but has existed since the 16th century.In 1561, Emmanuel-Philibert I of Savoy ordered that all official acts be written in French. However, since the unity of Italy, about 150 years ago, the use of French was lost in favor of Italian, which in the meantime had become the first official language of the Valle d’Aosta region.

For 160 years, France and Italy have been fighting over Mont-Blanc.
There is an area of a few hectares, about twenty, which has been the source of discussions for a long time.
The difference is the following, in one case the summit of Mont Blanc is located on the border between France and Italy, in the other case it is 100% in France.
This difference in interpretation is based on history.
By ceding Savoy to France, the Sardinian Kingdom accepted that the border would pass through the “most advanced points of Piedmont”. The French route is based on the Treaty of Paris of 1796, while the Italian route is based on the Treaty of Turin (1860), which positions the summit at the border.
If an agreement in 1860 established an official border, the subject regularly opposes the two countries. The Treaty of Turin of 1860 specifies: “On the Savoy side, the new boundary will follow the present boundary between the Duchy of Savoy and Piedmont”. The map associated with the 1861 delimitation treaty is not considered precise enough and does not always follow the crest line. This brings us back to the text, which is interpreted differently. 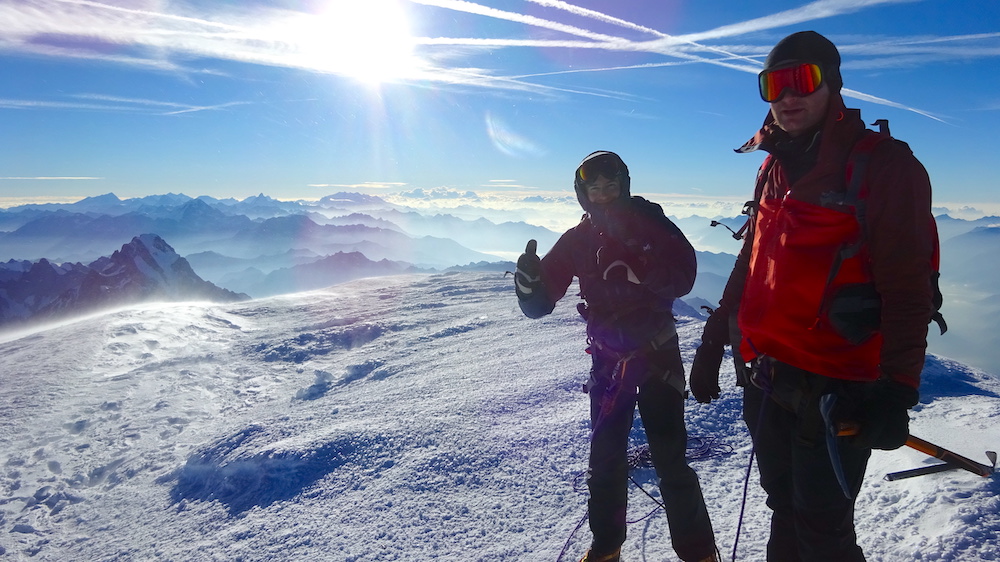 Alpinists at the top of Mont Blanc 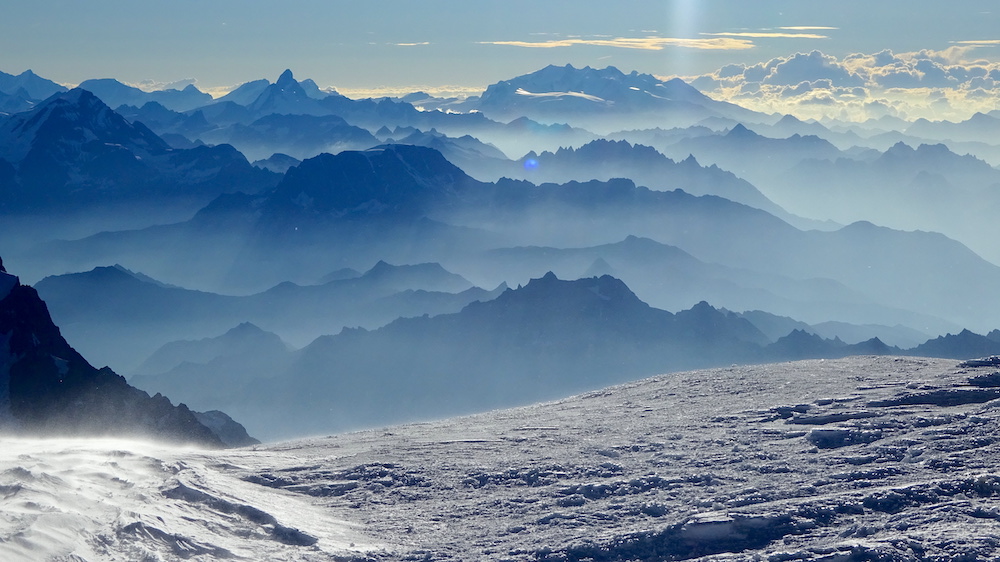 The Great St. Bernard Pass (2473m), the third highest road pass in Switzerland, originally named the Col du Mont-Joux, took the name of Saint-Bernard in the 11th century in homage to Bernard de Menthon, a man of the church and founder of the Hospice du Grand Saint-Bernard, which provides shelter and assistance to travelers who are victims of robbery. The Col du petit Saint Bernard (2188m) which marks the border between Italy and France also takes its name from Bernard de Menthon, founder of the Hospice located at the top. The years 1660-1670 saw the appearance of the first dogs in the hospice. The story goes that the Saint Bernard breed is the result of cross-breeding of dogs offered to the religious by families from the Vaud and Valais cantons. Originally, the purpose of the breeding was to provide guard and defense dogs, thus perpetuating Bernard de Menthon’s desire to make the mountains a safe place. But very quickly, the dog showed remarkable abilities in rescuing travelers lost in the mountains and finding people buried under the snow. The exploits of the Great Saint Bernard dog appear in many stories. Napoleon Bonaparte’s soldiers, in 1800, are said to have helped forge the reputation of this canine through their stories. 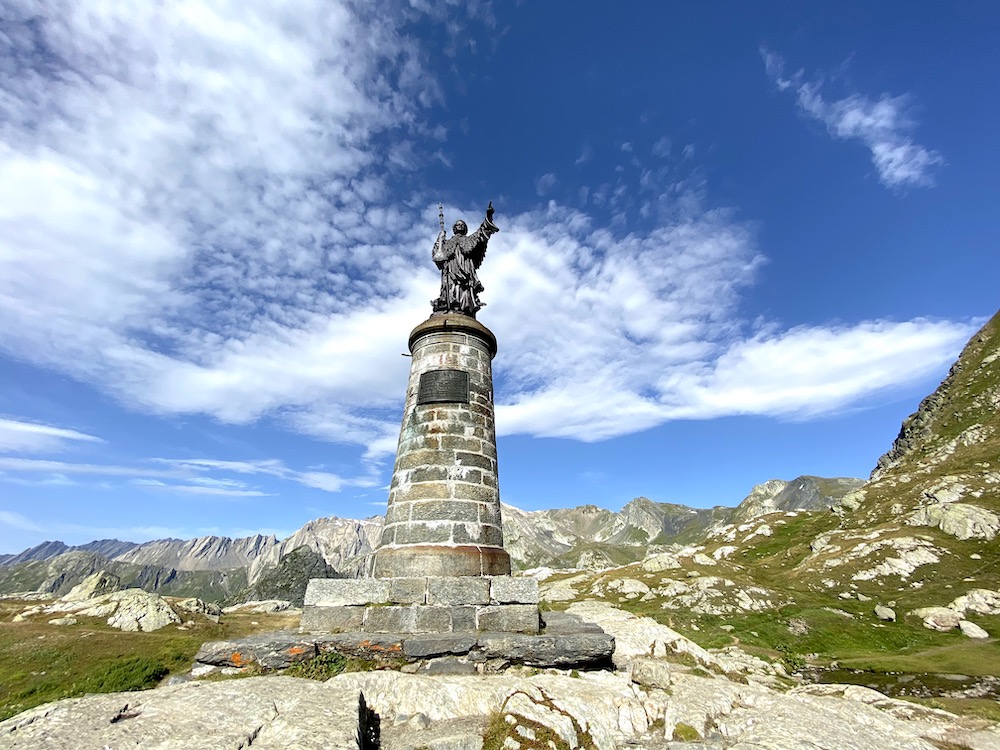 Statue of Bernard of Menthon (Saint Bernard) at the top of the Great Saint Bernard Pass. Italy 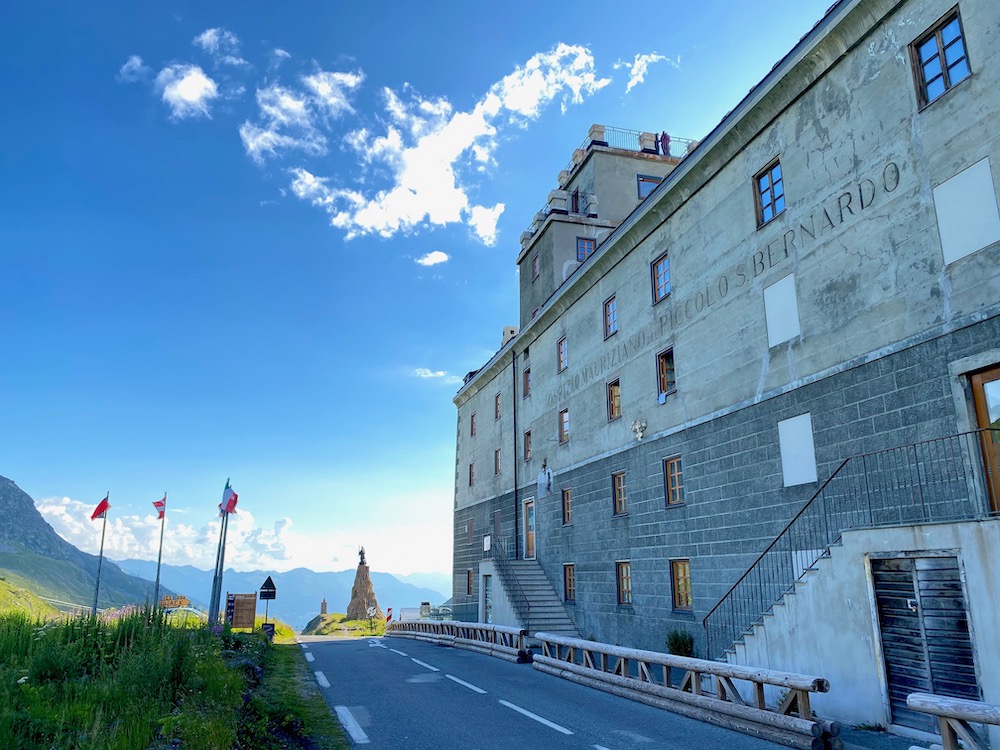 Hospice at the top of the Petit Saint Bernard pass. France

To finish this article, the summer period (June to September) is the best time of the year to ride around Mont Blanc by bike. And to discover our bike tour, it’s over here !