Taïwan Kom Challenge - One of the most incredible experiences we've ever had on a bike.

It was in 2016 that we first heard about the Taïwan KOM Challenge. The race has been around since 2012 and its reputation has taken only 4 years to cross the planet to us. Each year more media coverage and more participants were attracted, and Vincenzo Nibali’s victory in October 2017 contributed greatly to its popularity. 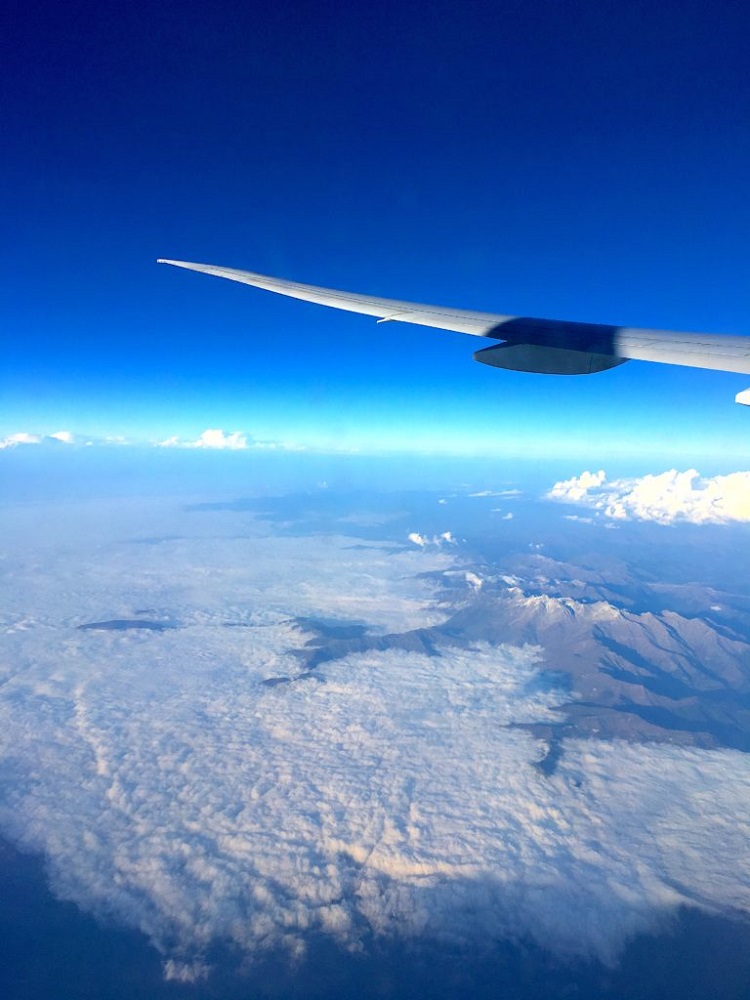 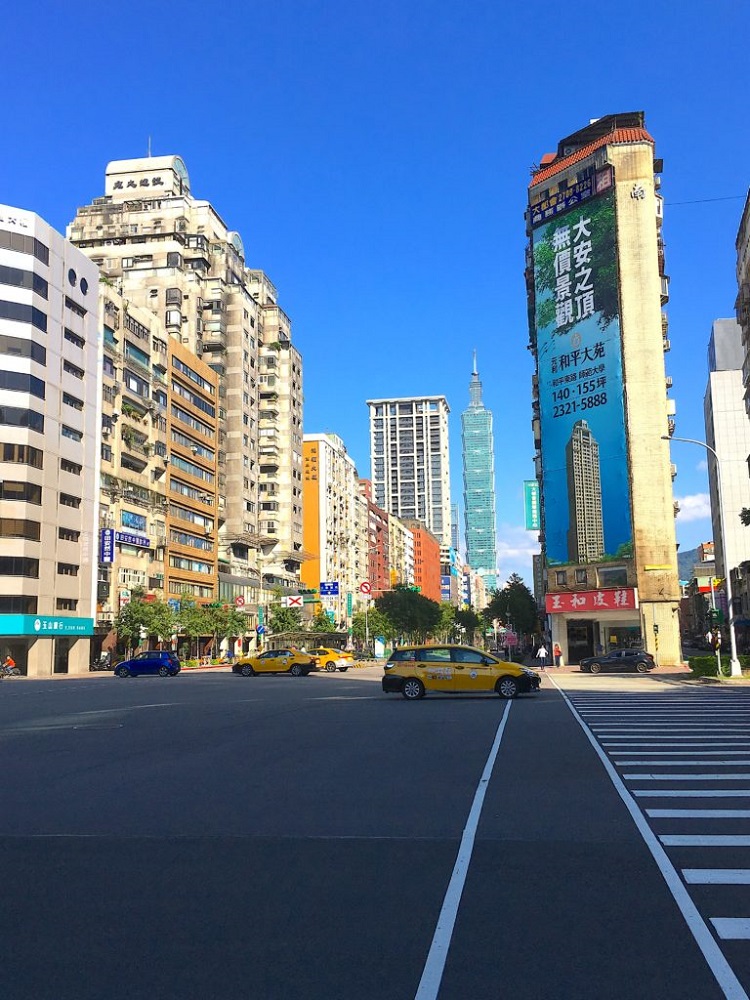 Reaching Hualien, the departure point of Taïwan KOM Challenge requires almost 17 hours of travel and 6:00 hours of jet lag. 13 hours flight from Paris to Taipei, then 3:30 hours by car. On the spot we recognized the ascent, in order to get used to the altitude.

Taïwan King Of Mountains Challenge connects in 105 km the shores of the Pacific Ocean to Wuling Pass at 3275 meters high (Mt. Hehuanshan). The time window is a maximum of 6:30 hours to cross the finish line.

In addition to the opportunity to take part in one of the most difficult bike races in the world, the possibility to ride with more than 800 riders from all over the planet, including some pros, is a source of motivation in itself, 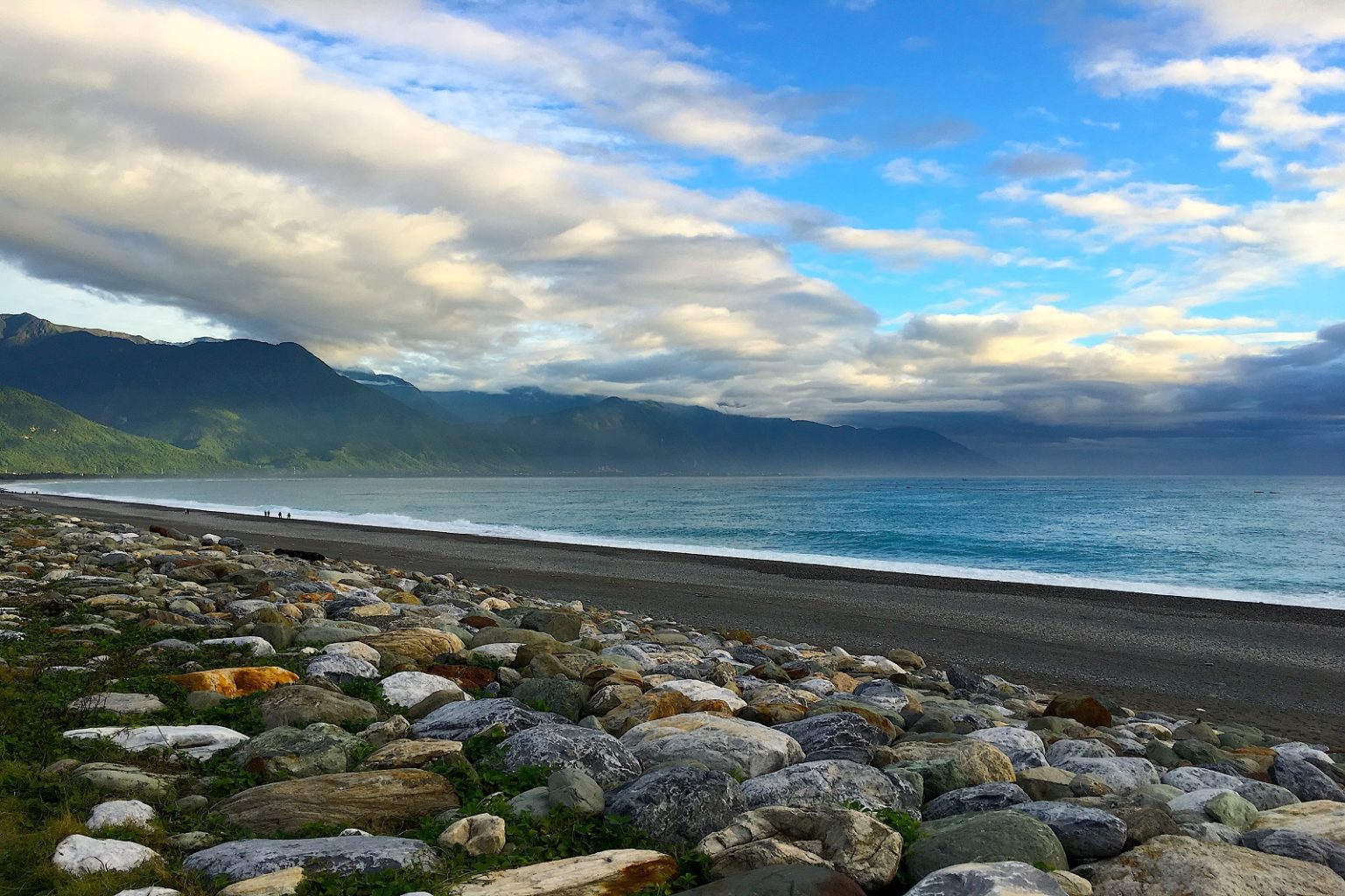 “The support of the locals during the recon was incredible.”

Even though cycling in all its aspects is part of our daily life, organizing bike trips does not necessarily allow us to be on our bicycle all the time. Throughout the season we spend a lot of time travelling, driving thousands of kilometres in France and Europe to supervise or recognize the cycling trips we offer.
All this to say, that our preparation in the mountains was far from being sufficient, but no matter, we are still young and love challenges. 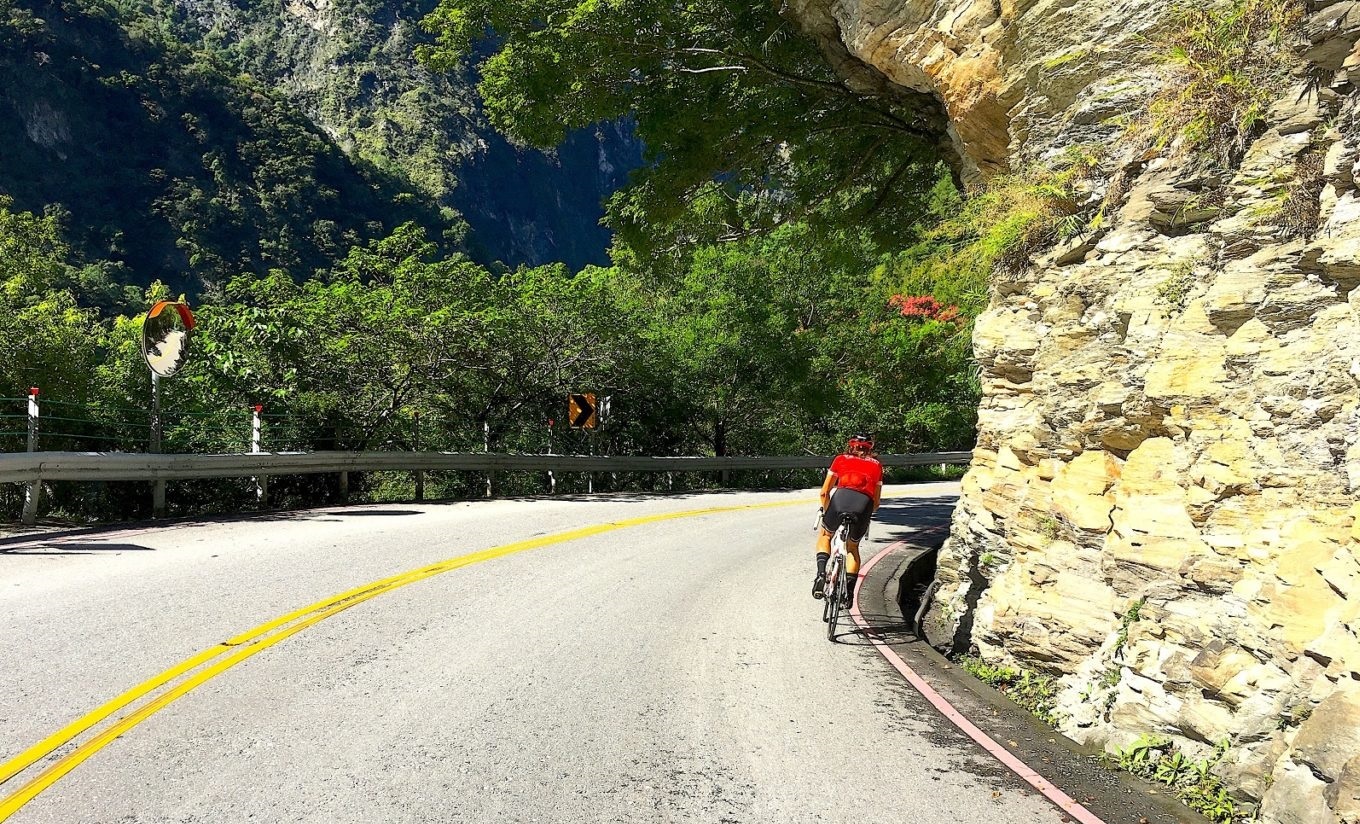 The day before the start the riders are invited to pick up their bibs at the Hualien Parkview Hotel where we meet some guys we saw a few days earlier on the road. The local and foreign press is there interviewing personalities. We have the opportunity to talk with some pro riders. We are surprised to meet so many Westerners here in Taïwan. 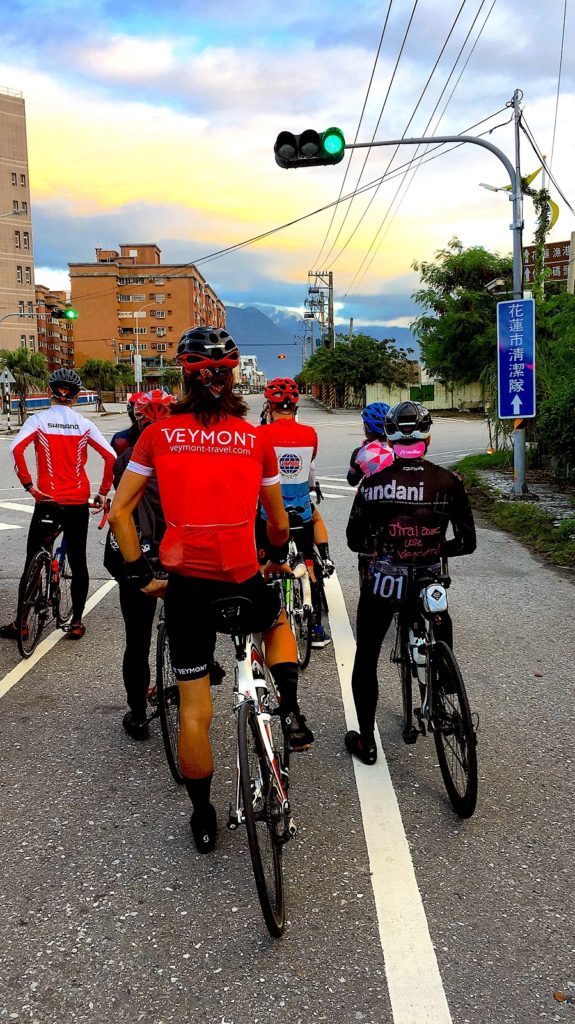 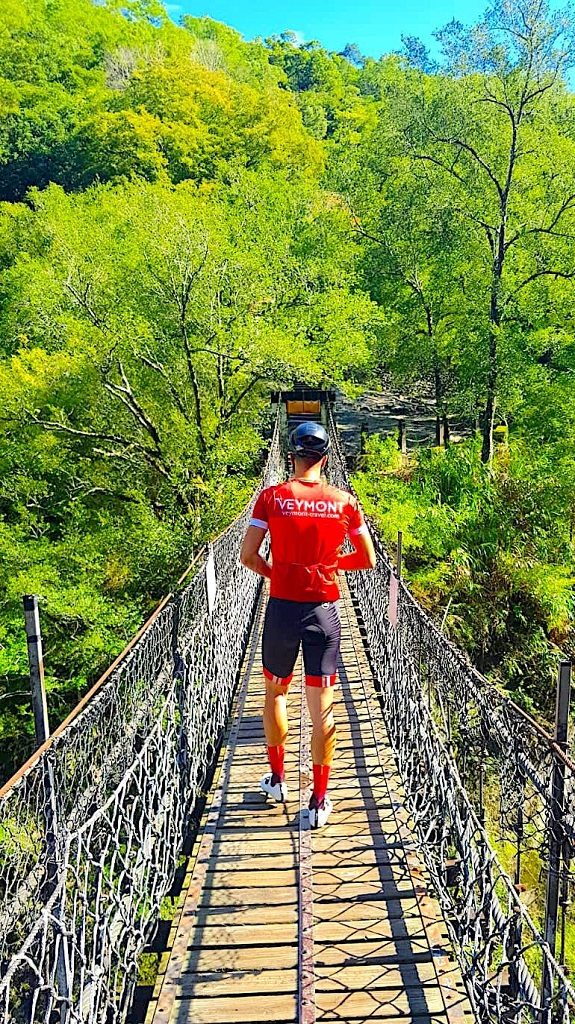 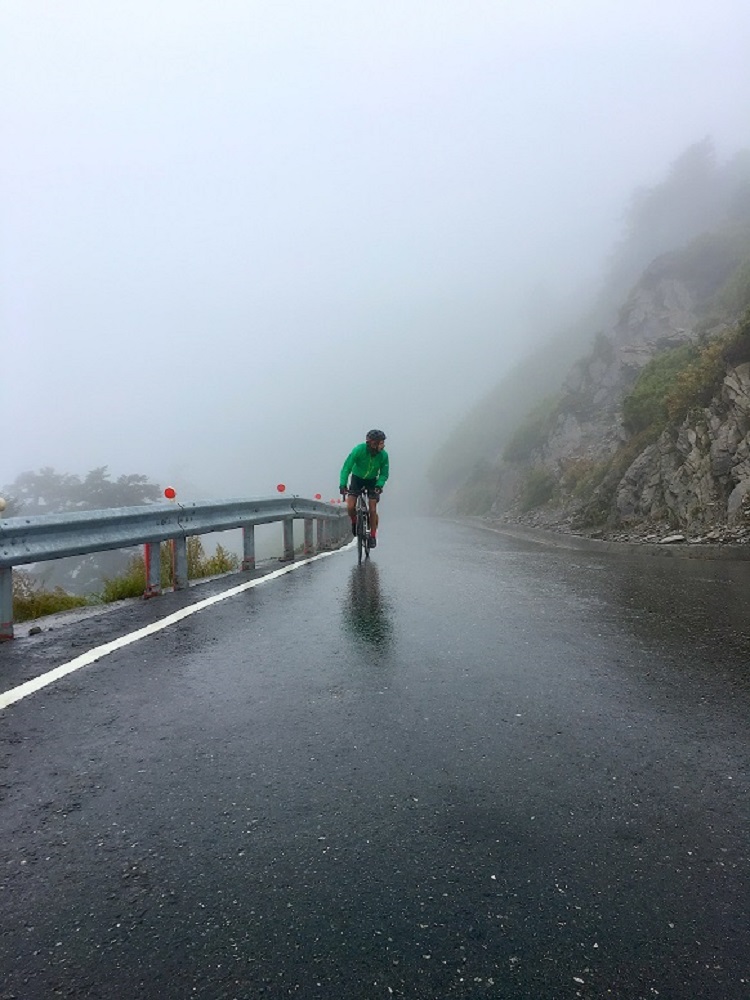 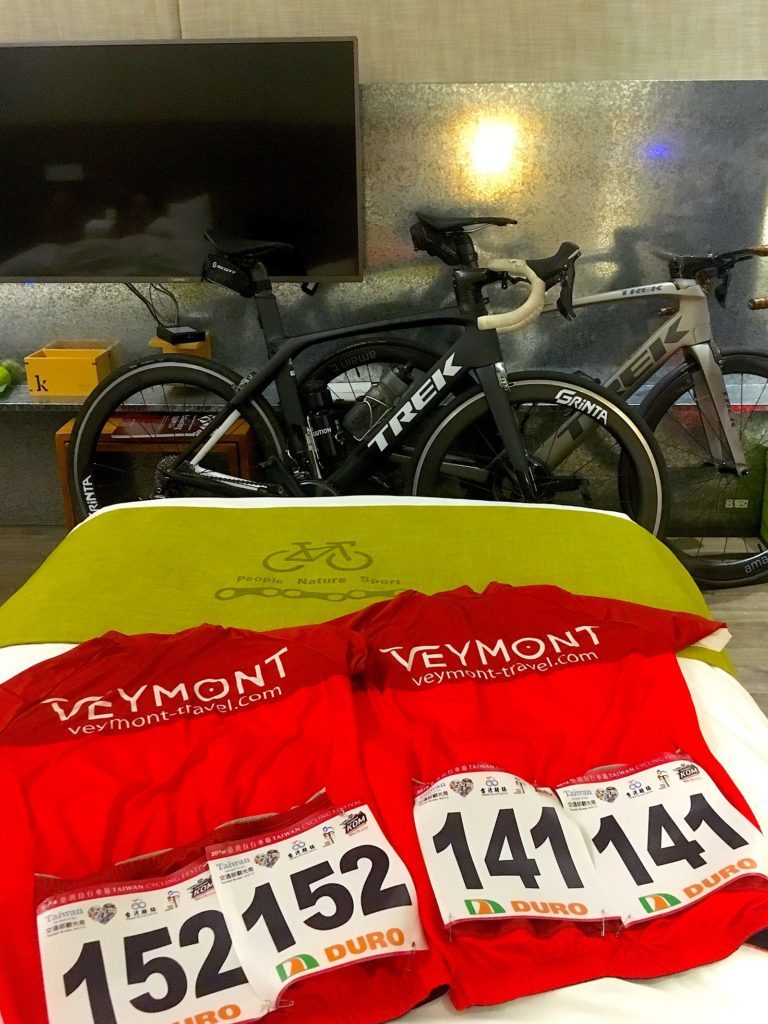 We have chosen to spend the night at the KADDA hotel. The place is a bike friendly, with a small workshop. In addition, there is a place to store your bike in your room. You can enjoy comfrtable room with a panoramic view on the Pacific Ocean. A number of pro riders and staff organisation have decided to stay there as well. 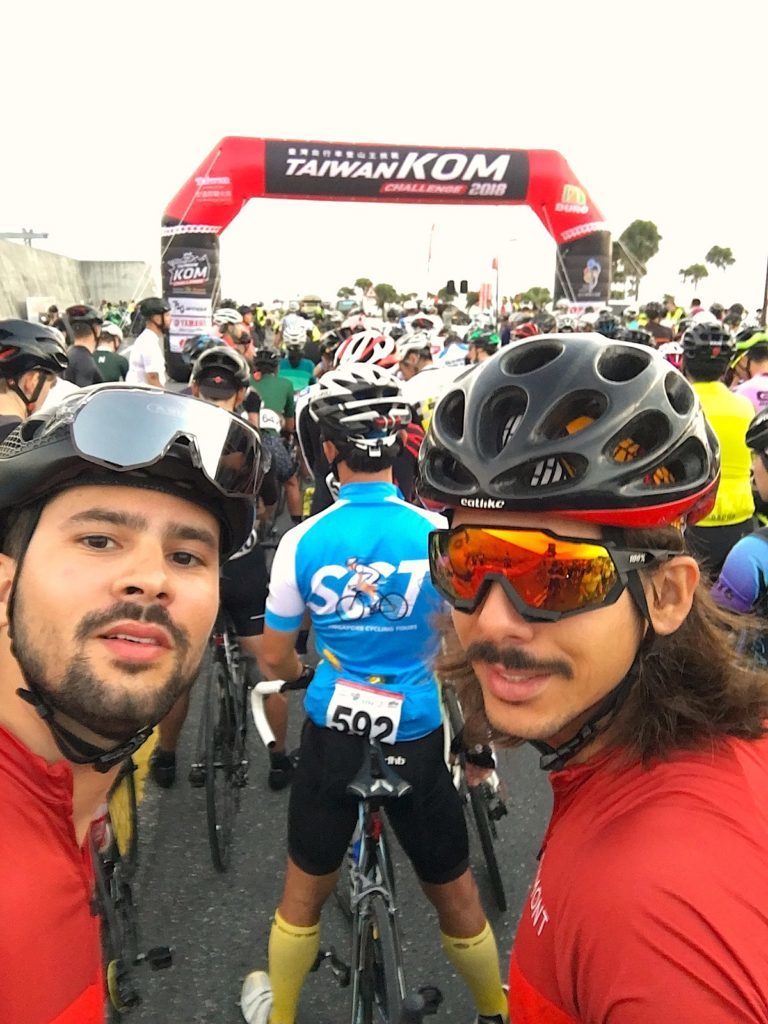 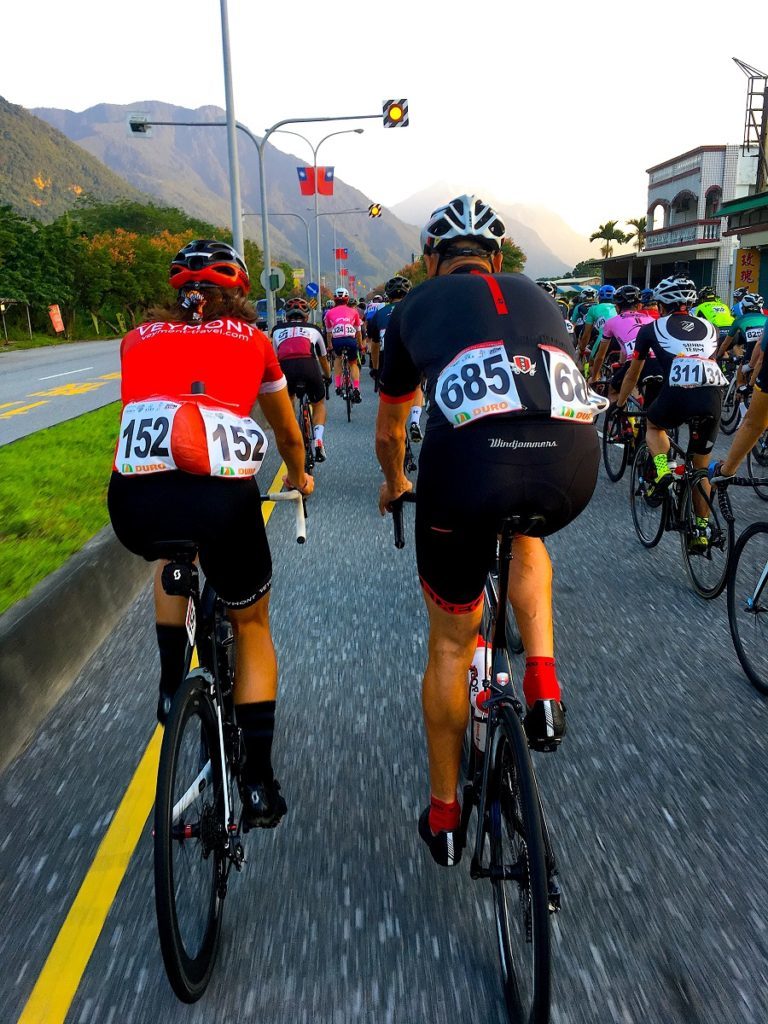 The night was short and agitated. The importance of the event, no doubt. We have to be at 5:00 am at the start to hand over our bags with our personal belongings to the organization which will transfer them at the arrival.
At 3:00, the alarm clock rang, giving us time to have breakfast and above all to fix the slow puncture on Florian’s bike. We could have done without this adrenaline rush given the rather tight timing in the morning.

6:00, the start is given, the atmosphere is falsely relaxed. Already over 20°C at the start and 10°C expected at the summit. The weather is good with a great sunshine announced all day long. At the start line, we try to be in the top 100 of this group of 800 riders for several reasons:

– to limit the risk of falls and the funnel effect on the relaunch and braking;
– so we can realize the old dream of riding in contact with pro riders in competition;
– to be able to hold a group that will pull us as long as possible before overheating. without making big effort, whil staying in the wheels. 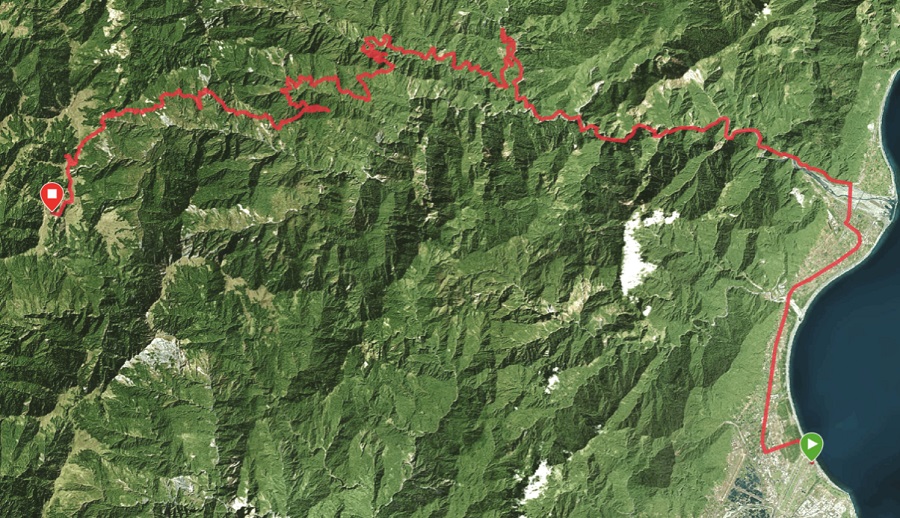 The first 18 km along the Pacific are neutralized, allowing everyone to warm up and take their marks.
The approach of the official start allows the pressure to be felt, creating an immense accordion effect in the peloton with each braking, everyone wanting to come to the front of the group before entering the Taroko Gorges. After passing the Taroko Bridge, we turn left, facing 3275m of altitude difference and definitively abandoning the Pacific. This is where the official timing begins. 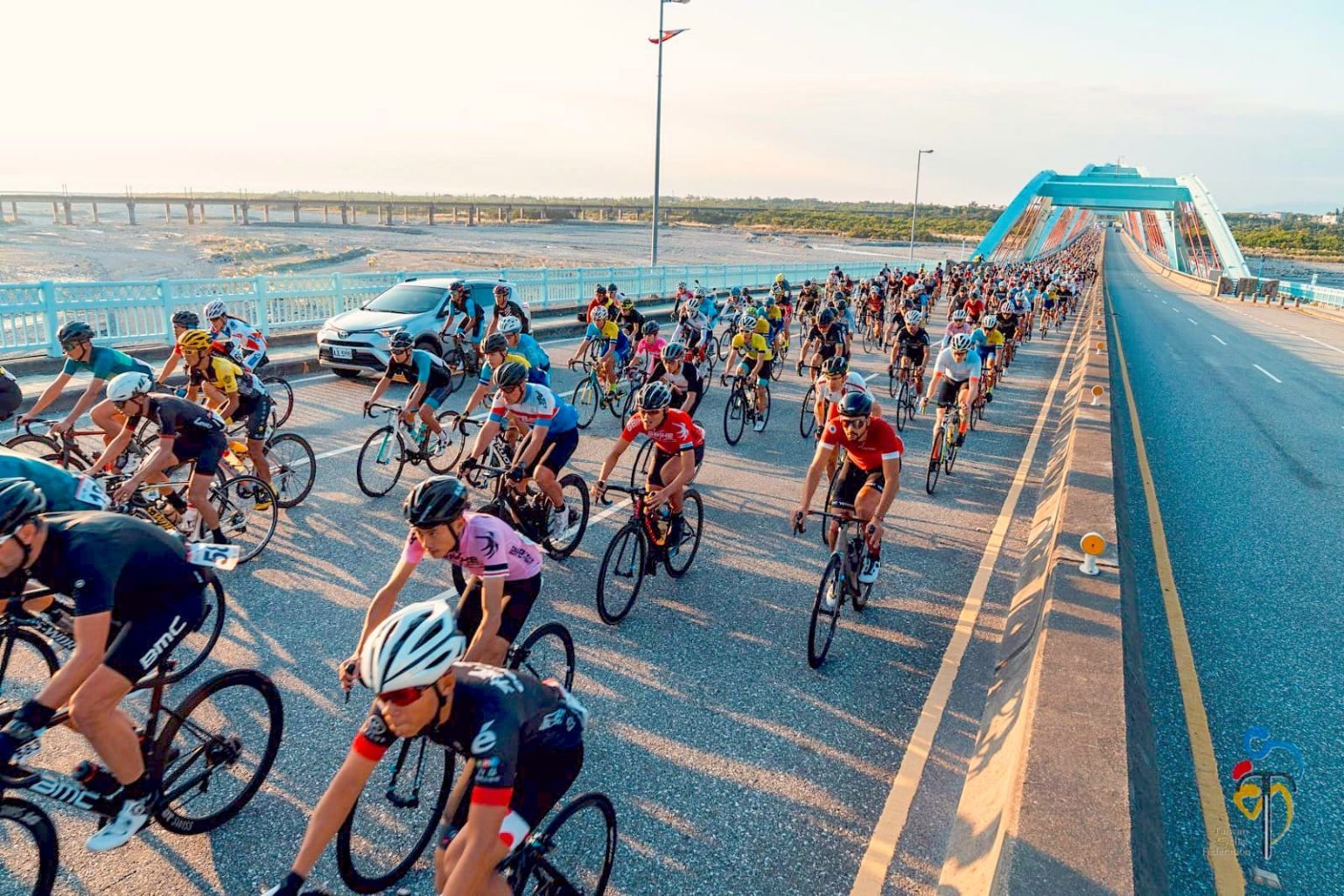 The road leading us into the Gorges is incredible, alternating between shady and sunny areas, wet and dry roads, tunnels lit or not.
The slope is gentle, 3-4%, the surface is good, the most difficult remains to come. Already we can see the peloton of the toughest riders escaping in the distance, a few curves higher up. 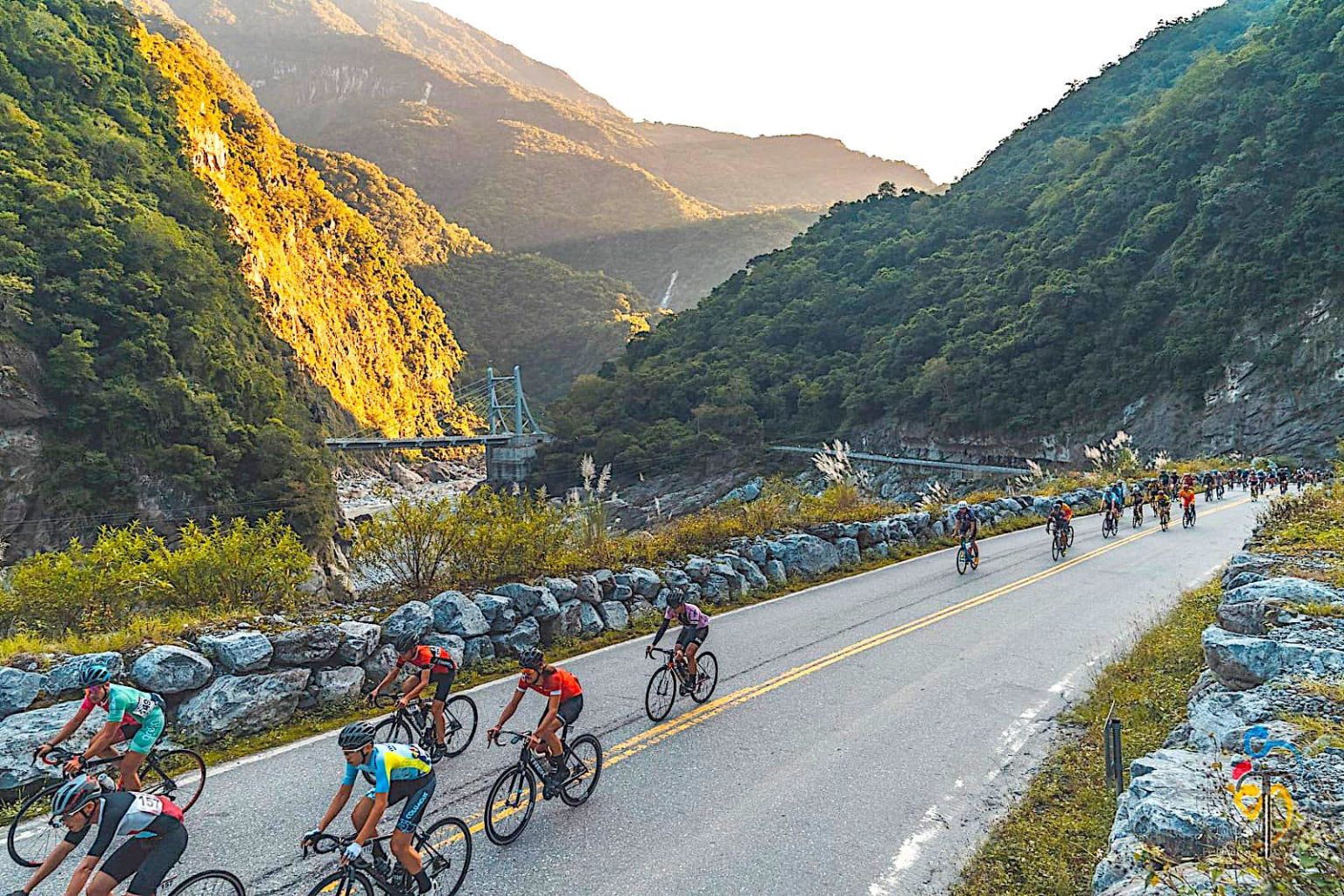 After the recon, we had decided to take advantage of the peloton or small groups as mentionned above to reach in good conditions the area called Tianxiang at 400m of altitude. Here the percentages become more severe, 8%, maybe more. Once this village is past, it is between your legs and your mind. And there are still 75 km left. 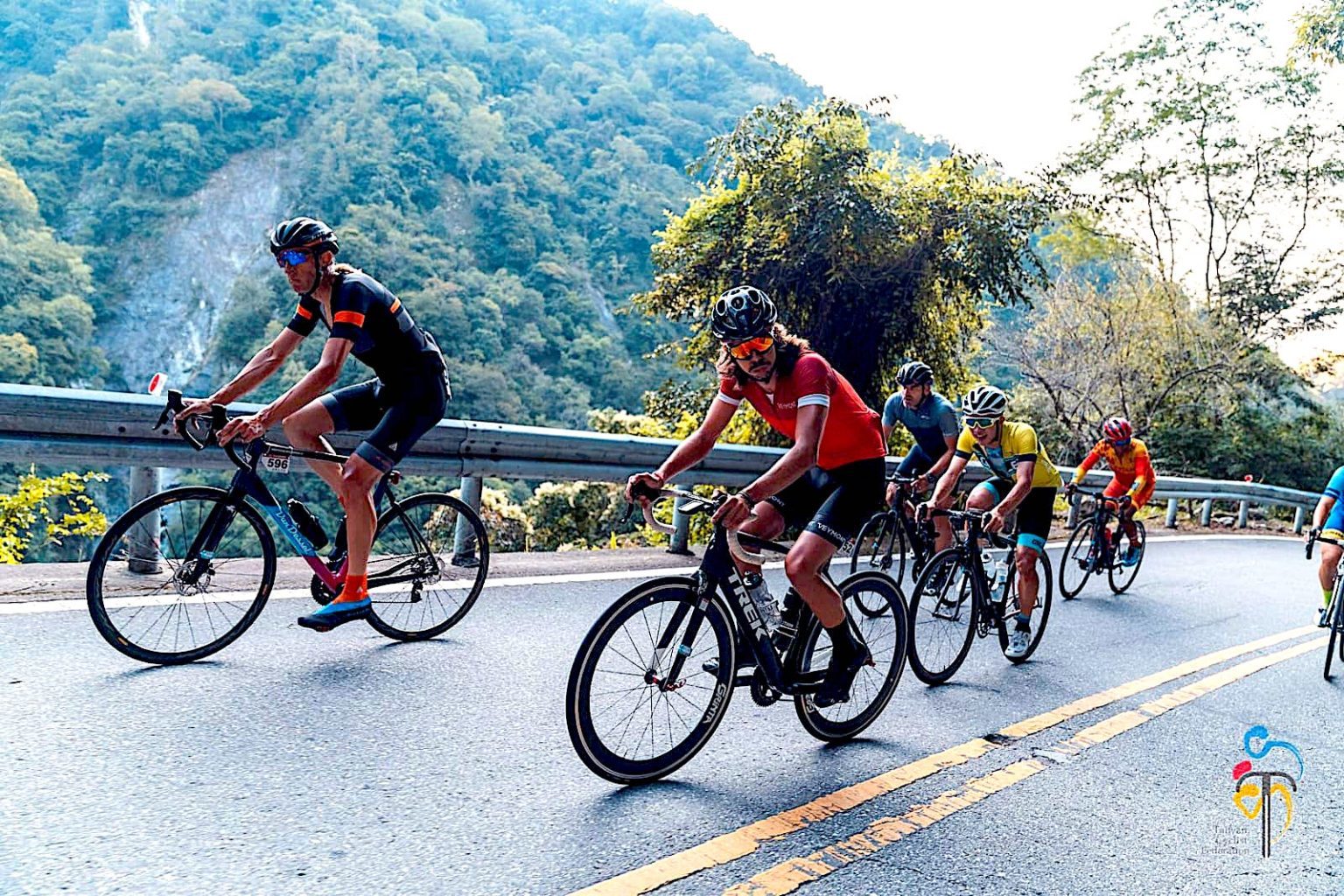 The average speed was over 30 km/h during the first half-hour of the official race. Florian’s in a big day, he’s flying away.

We saw so many guys go too fast in the first part of the race (overestimating their capacity or underestimating the rest of the climb) and then push the machine (on foot!) in the steepest part of the final.
Our “strategy” is now to ride at our own pace. Above all not to get excited by following stronger guys. Hydration and nutrition are also key to success. Feed zones are present every 10 to 15 km between km 45 and km 90.

The tropical forest replaces the gorges and canyons. The temperature is pleasant, the sun shines with us. 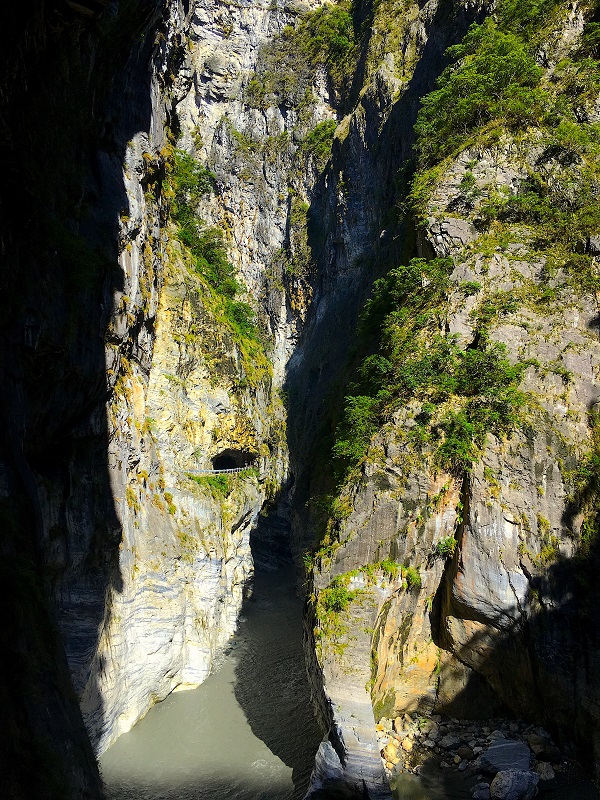 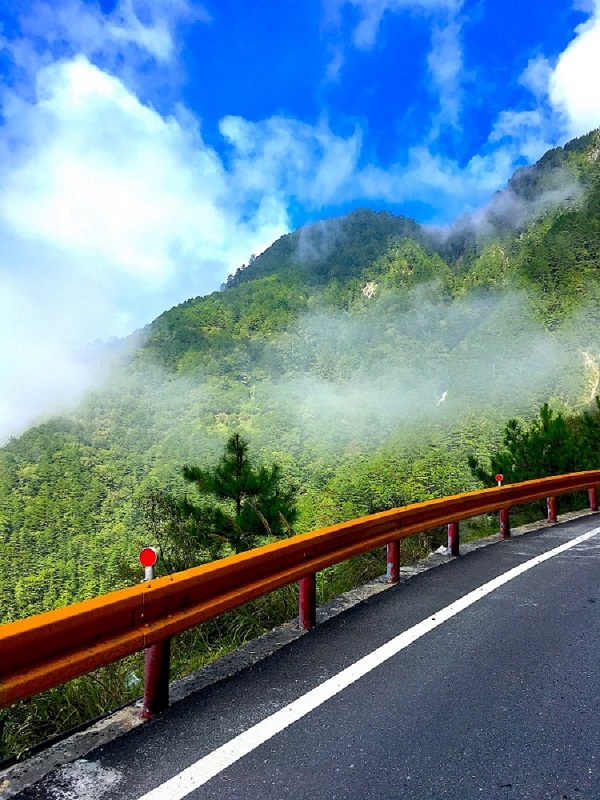 Km 64 – 1500 m of altitude. In only 40 kms of ascent we will reach the summit and its 3275 m. The most difficult percentages are approaching. For a few kilometres now, each rider has been driving alone. There is no more group. The competitors form an endless line. Each at his own pace. 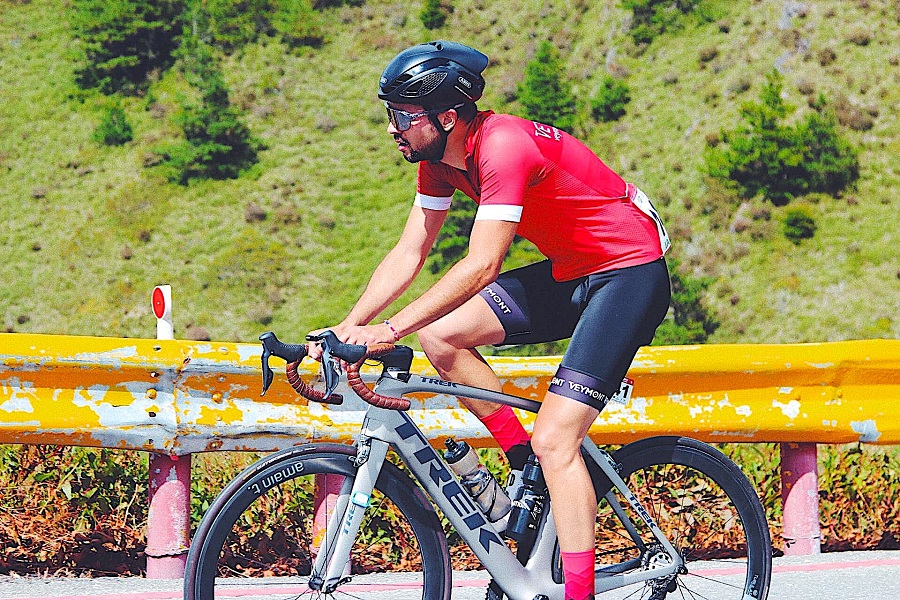 Alone into the wild, the spirit escapes to overcome the difficulty, pehraps to fool it. But the muscular pain is there to bring us back to reality. A glance at the clock and a thought for the goal set: about 5 hours.
On the other hand, the mind is also empty, savouring each moment, misleading time, conscious of the beauty of the moment. The physical challenge leaves you suspended in space.
Florian will later tell me that he started to suffer from cramps around km 65. With his good start he thought he could go under 4:30. But the kilometers passing and almost not being able to stand up on the pedals in the last hour, he had to face the facts that the 5 hour goal would be reasonable for today. 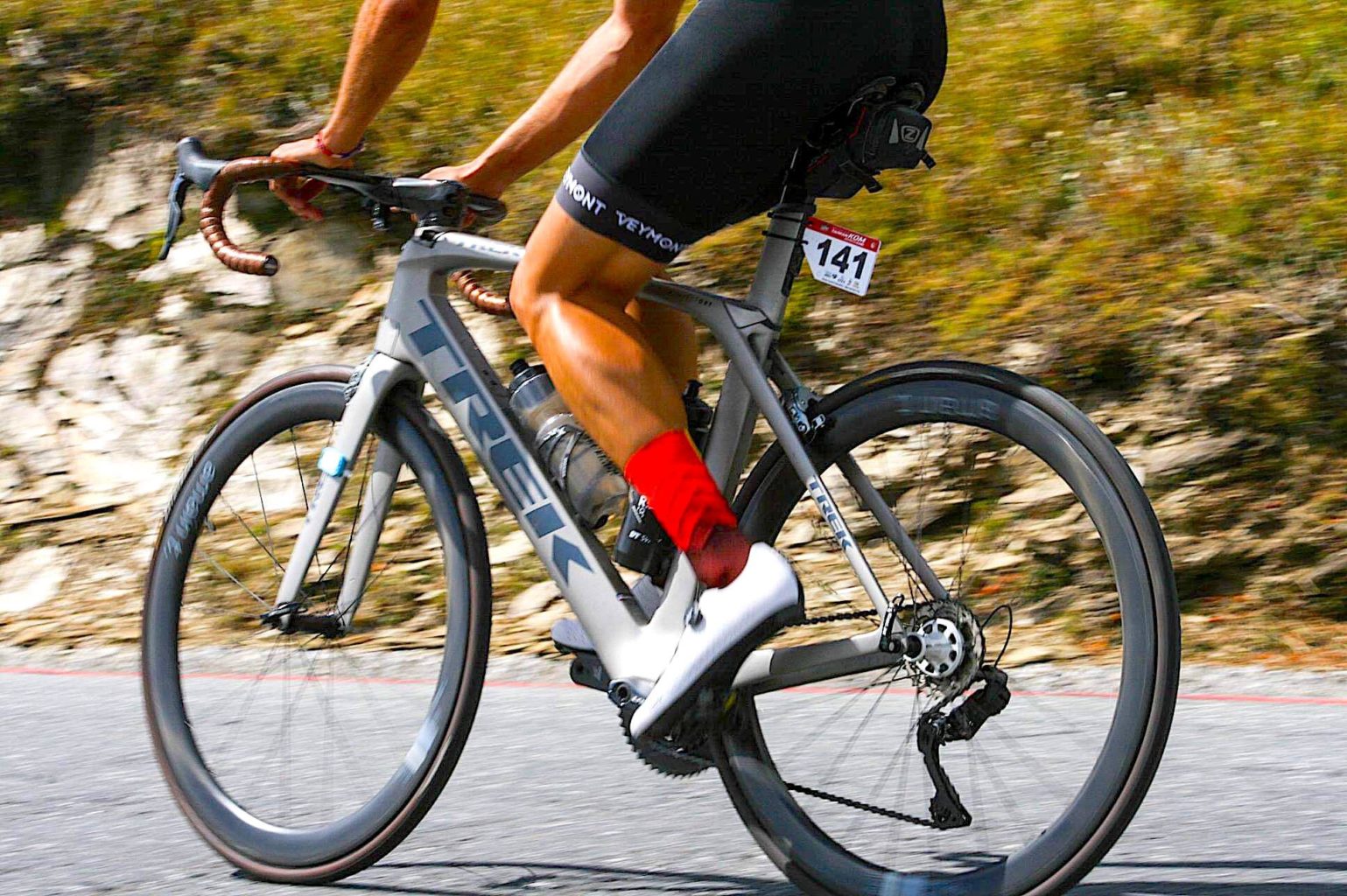 Vegetation is becoming rarer but oxygen rarefaction is not felt. We are at 2300 m alt.
We knew it, the last 15 kms are by far the steepest. Percentages ranging from 15% to 27% in places and some rest areas at 8%. 4 hours already that we pedal, having for only stops the few supplies where in a few seconds we fill up for the kilometers to come. The quads are getting harder and harder. 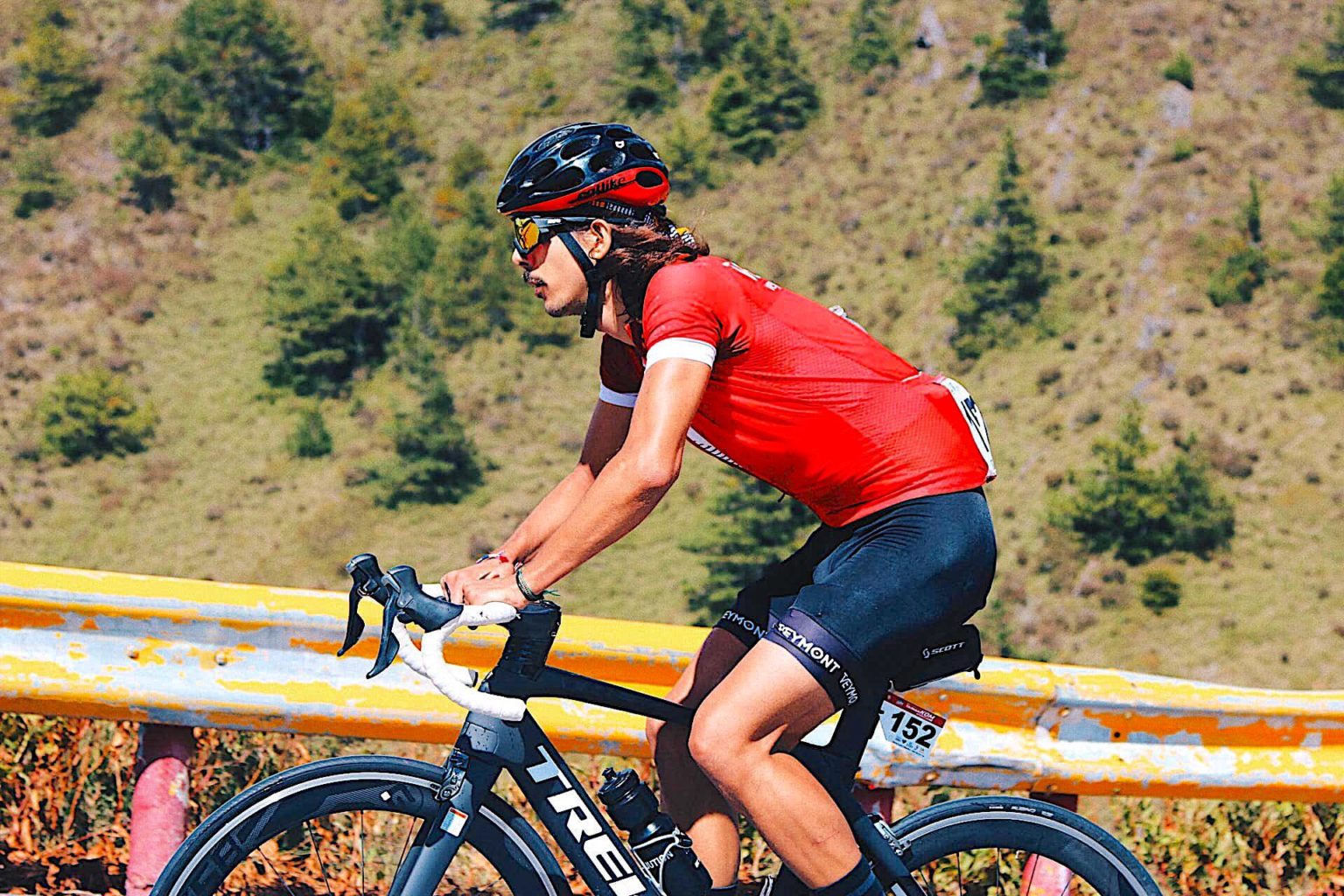 “KOM teaches you to look at the 7-8% as potential moments of respite.” 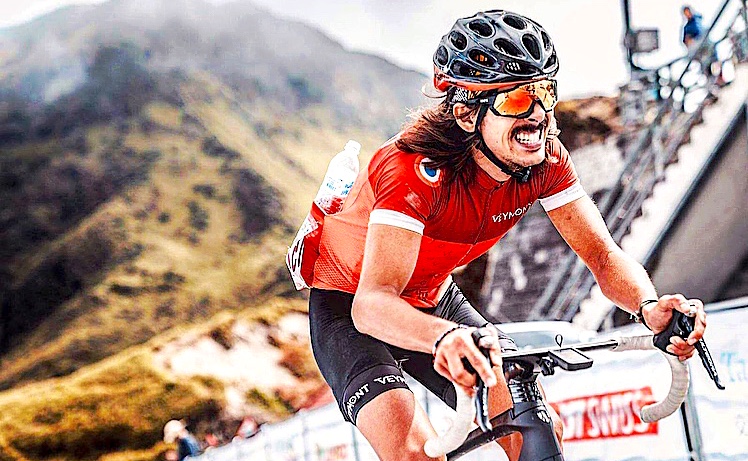 So close. So far.
The last Km is the most difficult.

The last kilometre alone is a compilation of what we have just experienced. It concludes the longest ascent we have ever done, giving us a sense of accomplishment and a feeling of pride as we cross the line. 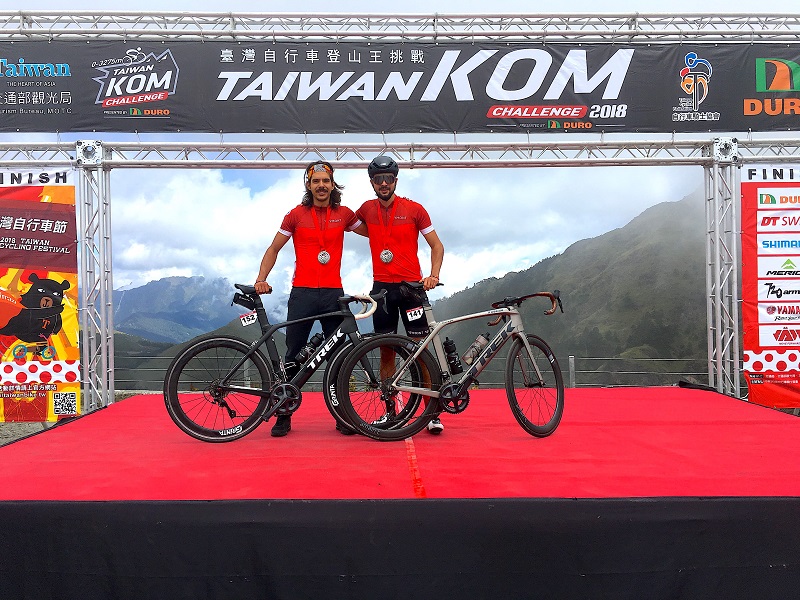 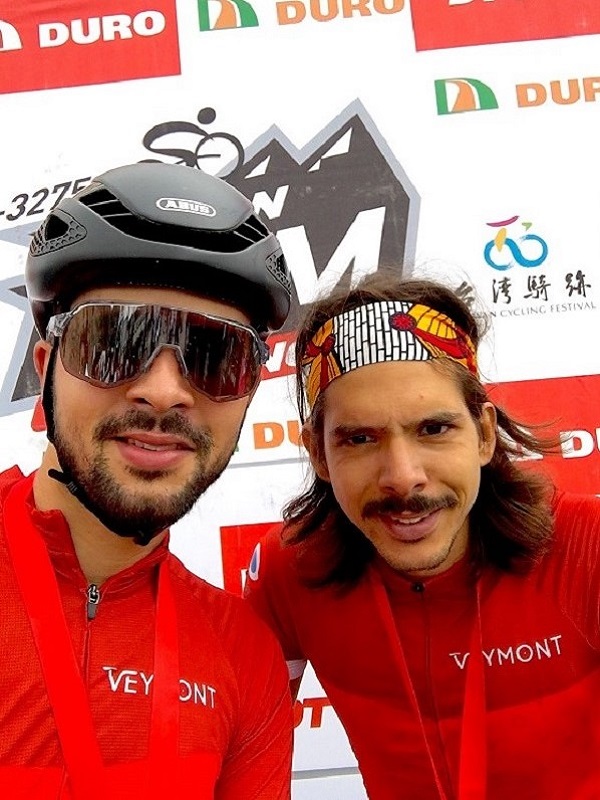 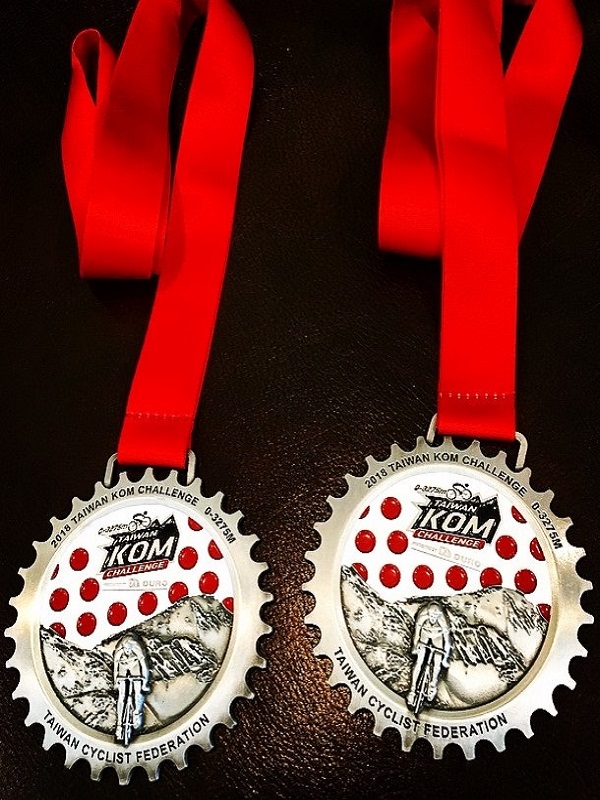